Fox and an old man 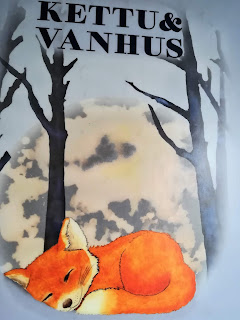 A fox cub is scared of everything and the others are mocking him (or her). After awhile he decides to leave. He walks and walks until he gets into the city, It is scarier than any storm he has ever lived through.

He runs to a meadow, where the sun is warming up the scared heart of the fox.  He realizes he is not alone. An old man is sitting on a rock. The fox tells him how the others said awful things to him. . The old man says, words like that are like clouds on the sky and that the foxes heart is just the way it's supposed to be. It is much braver to be just like you are instead of being something the others want you to be.

The fox cub decides to go back home and he has many stories to tell. He is still scared of storms, but the others leave him alone.

Posted by Hannahippo at 1:45 PM