How the elk got its antlers 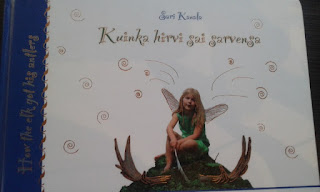 Story about elk, bear and a fairy.

Elk and bear are good friends. One day a fairy comes with large antlers and offers them to the elk and the bear. The bear wants them. He is the king of the forest after all. The elk doesn't mind. 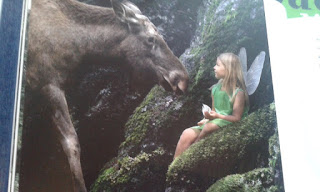 Summer passes along and the antlers give bear a lot of trouble: he cannot eat berries or catch fish with them. He is almost starving and he calls for the elk and offers the antlers to him. The fairy takes the antlers off the bear and gives them to the elk.

The lesson of this story is that you don't have to have everything. Sometimes you are better off without gigantic antlers. Let the elk have them.

The book is illustrated by photographs and watercolors. The photos have be "photoshopped" so that the elk, the girl (ie the fairy) and the bear can all be peacefully side by side. This book also has the text both in Finnish and in English.

Posted by Hannahippo at 1:23 PM No comments:

I have never visited any of the lighthouses in this book. I have seen the Suomenlinna Chuch, which is used as a lighthouse. But the names of the light houses I have heard many times in the radio, where they tell the marine weather.

A few summers back, my parents spend a night at the Bengtskär lighthouse. It looks nice, but my father was complaining that there was nothing to do.

In the map (the picture below), you can see that Märket is really close to Sweden. It is actually divided by the boarder between Sweden and Finland.

The beginning of the book confused me a little, when they talked about valomajakka (literal translation light-lighthouse). I was thinking can there be a light house without a light. Actually there can, the early lighthouses were ID lighthouses without light.  I learned something new again by reading a "kids book".


Pekka Väisänen also wrote about the Finnish lighthouses for the Finnish Embassy in London.

Posted by Hannahippo at 11:12 AM No comments:

Tales from the old church 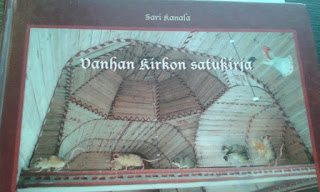 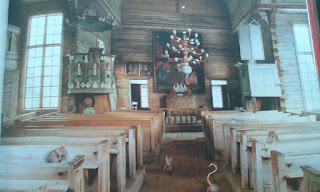 Tales from the Old Church of Petäjävesi.
The stories tell about an elf, who rings the bells at night, micshievous crows that learn a lesson and the church getting ready for Christmas.

The illustrations are photograhps that have watercolor elements in it. Sometimes it is really hard to tell apart the watercolor from the actual photo. The old church has a fairy tale charm to it.

We Finns take our wood seriously.  Stones were used scaresly since they were so expensive. And so we made our churches from wood. This wooden church is part of the World Heritage Covention.

When I visit the grand churches of Europe, I always wonder how much money was spent on them. How many people could have been fed or educated with that money? On the other hand, I admire them and am very glad that they still exist and that they are not torn down because of some idealism.

Posted by Hannahippo at 2:19 PM No comments: 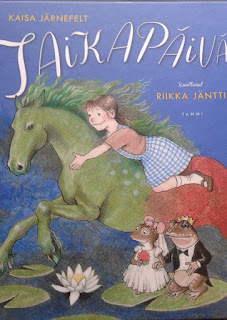 Posted by Hannahippo at 10:58 AM No comments:

Melody forest : in the footsteps of Jean Sibelius 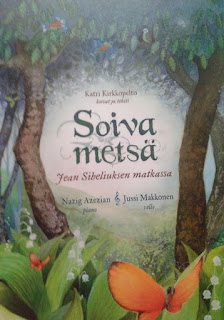 "Music is like a butterfly. If you hold it in the palm of your hand, turning it this way and that, inspecting it, its wings will lose their shine. It will still fly, but will no longer shimmer as it did before."

Jean Sibelius tells this to his grandchild, who is visiting him and Aino Sibelius.

Aino Sibelius tells the child about Jean or familiarly Janne. The book is beautifully illustrated. Most illustrations are from Finnish nature.


The book comes with a CD, which was recorded in Ainola by cellist Jussi Makkonen and pianist Nazig Azezian. The play some of Sibelius' most universally loved compositions, my favorites Finlandia and Valse Triste.   Finlandia gives me goosebumps every time I hear it.


Jean Sibelius was born 150 years ago and he is buried in Ainola, his home. Ainola is still open for visits.


This book has been published in Finnish, Swedish and English. 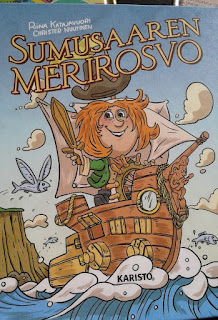 The story start, when the leading character tells us that his/her mother is a pirate: she has a golden tooth and she sings pirate songs and dances in high boots. There is also a curvy sword on the wall of his/her house.

The book is written in "I" perspective and the name of the child is never given. In my mind it is a small boy, but my sons think she is a girl. Fantastic Finnish language!

The child  studies the sea. She/he tells about the odd things, such as the blood of a crawfish is colorless, but when it is in contact with air, it turns blue. 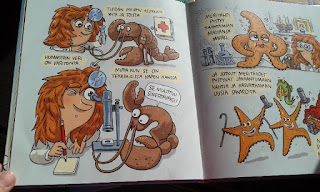 One day the fishermen are dumping dead fish to the sea. They must be stopped: everything is getting sick.

The book has fantastic illustrations and the message is very important. Save the seas! Especially in Finland we are worried about the health of the Baltic sea.  It needs to be looked after.

Posted by Hannahippo at 10:45 AM No comments: