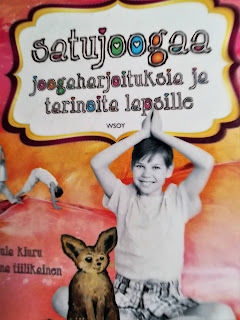 My youngest had joga in preschool! I was a bit surprised and very pleased. I would have never gotten my boys to do joga at home.

Now my son shows us moves like cat, snake,dolphin and camel. I do not know the "real" names for these. But the boys do the diligently.

Then I found this book at the libarary. (Have already told, how amazing the library system in Finland is? You can read the book and then if it is good, you can go and buy it.)

This book has three stories, a desert fox, bear cubs and a mermaid called Desmida. The picture show how the movement is done and it has been given a name suitable for the story: bobcat is cat asana. Bear is downward facing dog. 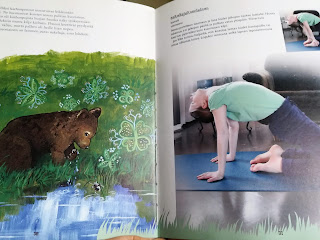 Even our stiffer than the old and stately pine dad got interested and the boys had fun, because they could do something dad couldn't! Always a competion.

The book also has exercises for recognizing emotions: what would a sad or glad statue look like. What kind of emotions does thinking "yes" or "no" create? and few others. 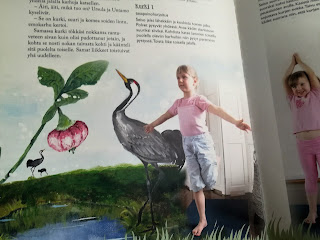 I also found these wonderful animal joga cards.
Posted by Hannahippo at 11:59 AM No comments: 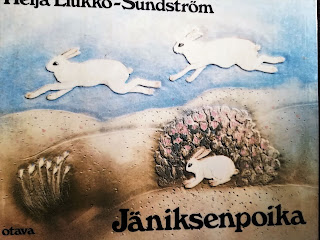 The bunny kids are going to jumping school, but the school is tough. Four of the five siblings are very good in jumping, but the fifth cannot stretch his legs for a jump. The doctor says there is no strength in the legs and mother is worried.

The bunny, who cannot jump decides he cannot stay and he climbs a tree with his strong front paws. One day a turtle comes his way and Bunnyboy is amazed, there is someone else cannot jump either. 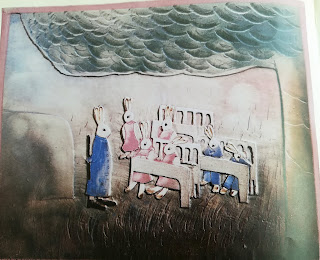 He starts to explore and meets an older gentleman bunny, who is afraid to cross the street. Bunnyboy digs him a tunnel under the street. The older bunny is impressed.

In the end a beautiful bunny girl, who can jump very far, finds him. And together they can jump far and then climb high when needed. 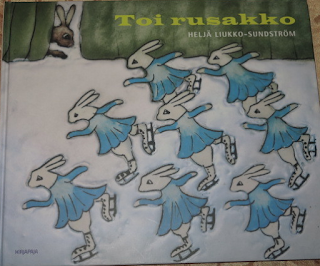 That brown hare (Toi rusakko 2008)
Brown hare Roi sees a group of bunnies figure skating. He wants to join in, but he is scared. He thinks he is too different. He decides to sew a white bunny costume. The white bunnies welcome him, but then he trips and his costume rips. The other bunnies are a bit amazed but then decide that Roi can skate with them. 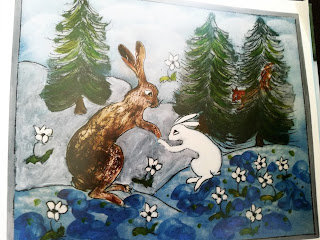 One of the white bunnies never speak to Roi. She often whispers to other bunnies and nods toward Roi. That bunny was not happy to have Roi skate with them. She talks to hedgehogs to come and whisper to  Roi. The spikes of the hegdehogs
hurt Roi. The hedgehogs hadn't thought of that and are very sorry. Roi misses practise and the other bunnies worry. They hear about the plot and they make the bully-bunny to go apologize to Roi in the dark forest. The white bunny stands out in the dark forest, because she doesn't have a brown fur for cover. The hawk gives her a scare and she hides under a tree. Roi passes by and she asks him for help. A squirrel says to her that she cannot ask for help, before she apologizes. So she does. Roi returns to the skating team and soon there are other brown hares practicing too.


This year Ms. Liukko-Sundström turns 80 and for that occation a biography was published. In that our beloved ceramics artist told her theory of dish memory: all the plates, cups and others remind us of the past. At least in Finland everyone recognizes the dishes Arabia makes. I my self have a cow and a butterfly pitcher that my grandmothers had. Most of the time all the old table ware are at the summerhouses.

To further celebrate the birthday, at the Arabia center is an exhibition of  Heljä Liukko-Sundström's new art pieces. Pictures below.

Posted by Hannahippo at 10:07 AM No comments:

The seasons in North are extreme: the summers are light and the winters are dark velvet and autumn is full of color. Not much left to say about spring. The animals in north gather on a fire at the first snow to reflect on the wonders of nature. Some are complaining of winter, but bear needs his sleep. Horse remembers running wild in the summer, while wolf likes nothing more than running in the snow. 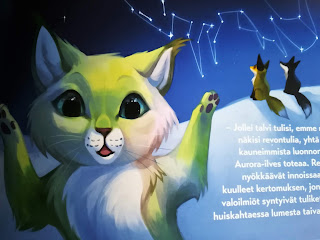 In the winter you can see the northern lights and the star, which are not visible in the summer. In the north the seasons have made the animals adjust to the changes. Even though this book makes it seam the seasons are made fot the animals.  Great book to read in the mid of summer, when winter is still so far away that it is easy to romanticize.

This is what we know on the northern hemisphere. What the book would be like on the southern hemisphere, when they even celebrate Christmas in the summer?

Posted by Hannahippo at 1:19 PM No comments: 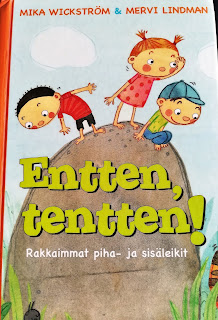 
A book of different games to play outdoor, indoors. These games have been played in Finland. My mother has told me that they played church rat when she was a child, we played it and now my boys play it.

This book also has some "newer" games like larping, parkour and footsack. These did not exist when I was a child, at least not in the country side.

Some of the games need more than five players for it to be fun. But the broken telephone can be played by two. At least my husband and I practice it regularly: one says something and the other hears something totally different. Not fun. But when there are ten sitting in a row and one whispers something and the message gets distorted until it reaches the end. That is kind of funny.
The name of the book is children's rhyme, which is gibberish.  I thought it came from Swedish, but now Google tells me it comes from German: Entel, tentel. Imagine that!