Finland - and a littele bit of Sweden

Small guide to Finland. The book covers briefly geography, arts, sports, culinary heritage and examples of Finnish dialects. Even Angry Birds are mentioned. Moomins, too, but they have been around half a century or more. They do mention the strong connection to Sweden, but Russia is totally ignored. Hmm.. I guess they had to leave something out, since it is only 30 pages.

I would not be Finnish, if I did not compare this book to the book of Sweeden of this same series. To that not I also cannot be objective, when comparing the two.

Sweden is itroduced in the same way as Finland is. If I were shown the photographs of Finnish and Swedish nature I could not tell, which one is which.


We eat basically the same foods, my mom's favourite dish is the Janson's temptation. A anchovy casserole, which I cannot stand.   I also thought the christmas tarts (joulutorttu) came from Sweden. But it isn't.

I wonder, why there is a hockey player in the cover of the Swedish book.  Well, we have Santa. But I still think hockey is played too much in both countries.

The section about the dialects in the Finnish book is interesting.

These are just examples, not restricted to the one city but the region around it. This also makes the language a bit difficult to learn, since the written language is so different from the spoken language.
Answers:
1. in Joensuu
2. in Kuopio
3. in Seinäjoki
4. in Salo
5. in Rovaniemi
6. in Helsinki
7.in Tampere
8.  in Oulu


Funny thing about music though, in the Swedish book Abba is mention, in the Finnish book only Robin and Chisu, who are famous only in Finland. Where are HIM, Sunrise Avenue or Apocalyptica? I realize the book is meant for Finnish kids, but shouldn't they know these things, too?

Posted by Hannahippo at 12:16 PM No comments:

What a visit to the museum 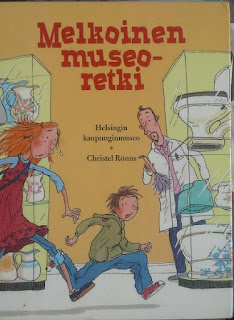 
Helsinki City Museum turned hundred in 2011 and to celebrate they wrote a book about behind the scenes for children.

In the book  Aunt Johanna takes Otto and Emma to visit the museum.  The museum is opening a new exhibition and Emma gets lost when she is falls into a moving box. Johanna and Otto try to find her. The look into the picture archive, work shop, map room and research lab.

Emma is finally found in the exhibition, where she pretends to be a doll. Aunt Johanna needs a relaxing bubble bath after the visit. 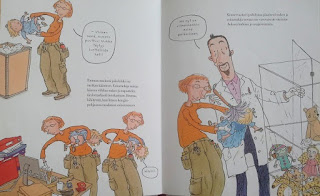 Museums are great. In Helsinki most of them are small enough for an hour visit as a comparison to the Heremitage or other huge museums that take a week to visit.


Posted by Hannahippo at 3:20 PM No comments: 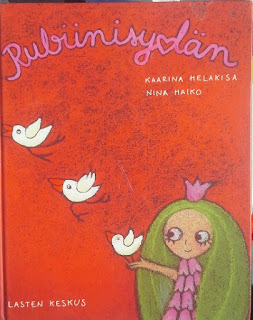 The king of the forest gives a ruby heart to one child every year for inventing a way to keep the dragons happy. The dragons feed on the flowers and plants and hold iron eggs that if they were dropped on the forest, would destroy it completely.

This year a litte girl with hay hair wants to have the ruby. The most modest of the flowers, twinflower promises to help. The girl writes letters to the other children in the other forests and they all decide to bury the dragons in their caves with stones and stop feeding them. The king gives the girl the ruby heart, which she then splits and the birds takes the smaller ruby hearts to all the children in the other forests. The dragons won't be eating the flowers anymore.

This book has been translated in English. 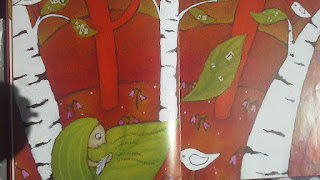 Posted by Hannahippo at 3:37 PM No comments: 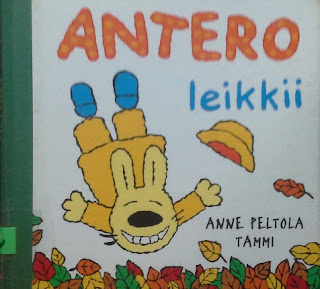 One morning in the fall, Andrew gets a message from his friend Siiri to came and play in the playground. He puts on his rain gear and heads out.

When he gets there, Siiri is now where to be found. Soon she arrives and they have fun pretending to sail to see the seals, swans and beaver.

The wild boars and bear are raking and preparing for winter. Fall can be fun! 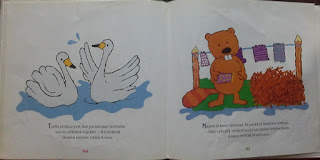 I especially like when the season's change. You can focus on the wetness and darkness or enjoy the small positive things in fall. The season will change some day.

Posted by Hannahippo at 3:36 PM No comments: 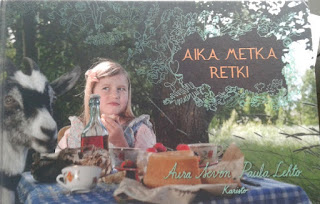 Seven year old Elsi is listening to her Great-grandmother's stories about her childhood and is taken back in time to the 1930's.


Lempi's mother was a working woman and the kids in the block stayed home with other kids. Some women were taking care of them. Elsi imagines what the life was like back then.

The book has lovely reconstructed photographs and the story tells many details from the past.

My grandmother was a maid at a local manor so the stories in from my family evolve around farming not city life. That is why this book was so interesting. I assume that not all families living in the city were like this, so it might be a little romanticized, but I don't care. Nice book any way.


Posted by Hannahippo at 3:28 PM No comments: 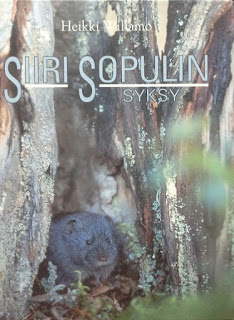 Siiri is a young lemming, who has been eating well in the summer. In the fall, she notices that the other lemmings are getting restles. Where are they all going?

Siiri wants to go with and she follows them. The lemmings form queues. She even swims when the walkabout takes her to the lake shore.

Siiri also visits a human garden, where she meets chickens, a cat and children.  She has to get back to the forest. There she meets another danger: a harvester, which cuts down trees.  She keeps on walking and soon she is back home.

When she has spend a few days, she meets Sampo. Siiri had thought all the other lemmings had left and was glad to see some body else. 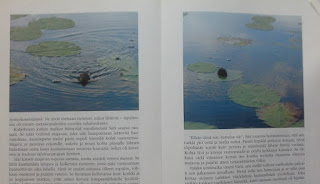 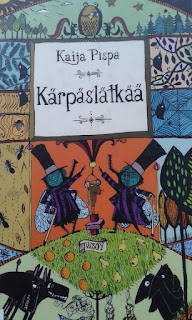 This name was hard to translate, since "lätkä" also means hockey in Finnish. Cute poems about bed bugs, cows that go crazy. Swans that leasurely swim by the lake, whining crow and many ohers.

My personal favourite is the "Biological reality", where the lesson is that if the owl does not feed its young, the young keep crying.

Second favourite is the "Spastic asparagus", which really does not make any sense, but is fun to read.

Posted by Hannahippo at 5:25 PM No comments: