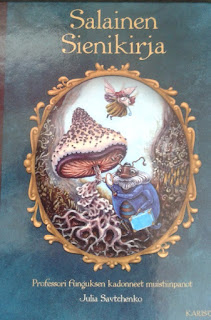 Professor Cornelius Fungus is exploring the fascinating world of fungus with Mrs. Rimosa.  Together they find all kinds of intriguing mushrooms.

The book is a fictional "encyclopedia" that my boys found very interesting. Although I had to tell them that these kind of mushrooms do not really exist.

My favorite is the fancycollar mushroom which only appears in garden parties. Professor Fungus and Mrs. Rimosa had to throw garden parties in three different nights before this beauty appeared.  This mushroom grows in places, where it can sense the party atmosphere the best. 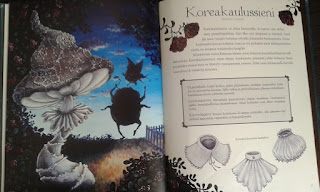 Boys favorite was the woolly milkcap with teeth (karvarousku in Finnish). It almost looks like the real thing, but has teeth.

The book is mysterious and fun. Besides all Finns a some point of theirlives pick mushrooms in the forest.

Posted by Hannahippo at 1:26 PM No comments:

Otso and the toe eaters 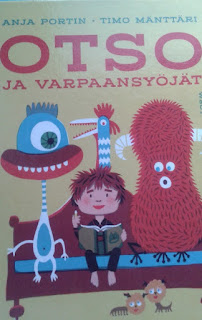 Otso is staying at his grandmothers and they have fish for dinner. Grandma tells Otso about the food chain: a krill eats plankton, a herring eats krill, a cod eats herring and human eats cod.

This starts to bother Otso: what will eat him? He tries to apply this theory: a bug that will be eaten by his soft toy, which then will be eaten by Grandma's cat. Then Otso will eat the cat and Grandma will eat Otso. Because Grandma's must be at the top of the food chain. Grandma laughs at him and the bug runs away and the cat couldn't care less. 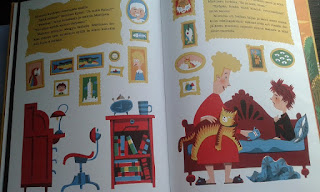 Otso starts to imagine the creatures that will come and eat him.  Do they have bellybuttons? Will they use knife and fork? He can't sleep. Back at home dad reminds him about his name: Otso is a nickname to bear. That relieves Otso and he no longer is scared.

I guess it is universal that kids are afraid of bogeymen. And usually the fear is triggered by the strangest things.  I like the illustrations of this book and how Grandma's house really looks like Grandma's house.

Posted by Hannahippo at 1:45 PM No comments:

Day at Linnanmäki: the most fun quarter of Helsinki 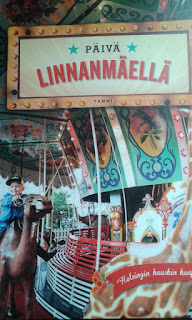 To some people Linnanmäki is the only real amusement park in Finland. This book tells about the different rides from the Carousel to the rollercoaster.

The book is full of colorful photos and stories of people visiting the park. I did not know that underneath the roller coaster is a secret garden growing apples and other fruit. 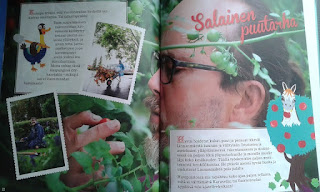 When I was a teenager the best ride was the wooden roller coaster. I still don't know if  the speed of the ride or the fact that I was a afraid the wooden beams would break was the most exciting. Or maybe it was the cutest guys (Jarrumies) operating the cars. It turns out that I was not the only on after the guys of Vuoristorata. In this book many women tell that the only reason they came to Linnanmäki was the guys of the wooden roller coaster, which was built in 1951.

There is really no comparison between the huge modern day amusement park, Linnanmäki feels like a museum, but that is part of it's charm. It is also run by a charity Children's Day Foundation, which supports the wellfare of Finnish children.

Posted by Hannahippo at 12:56 PM No comments: