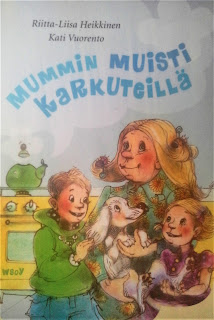 Anni and Topi are on summer vacation and they are going to spend it at Grandma's. She is supposed to come and meet them at the bus station, but she is not there.  The kids find their way to her house and she is surprised to see them.

The kids enjoy their first day with Grandma and her dog. The next day Grandma forgets to feed the dog. Later that week Grandma asks the children if she remembered to go to the store or get the mail. The last day Grandma bakes a blueberry pie, but forgets it in the oven.

The kids wonder what is wrong with Grandma, why she remember. Anni suggests that they get her a memory stick, but Topi knows it is for computers. They decide they ask Mom to buy Grandma a notebook and if she asks why, then they tell her. 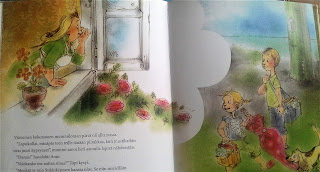 We all are getting older. In my opinion this book nicely tells about how the kids see the changes in loved ones.  I was a teenager, when my Grandpa started to loose his memory. But he also became jollier, where as my Grandma remembered everything and became bitter. Which one is better?

Posted by Hannahippo at 8:06 AM No comments: 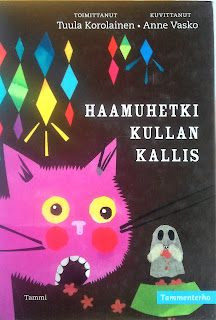 For person who does not like poems, I read awfully lot poem books. The Finnish title of the is book is an adaption of the Finnish saying "Aamuhetki kullan kallis" which is direct translations of the Swedish and German proverbs: "Morgon stund har guld i mund/ Morgenstund hat Gold im Mund". The meaning being the same as in "Early bird catches the worm."   Again these saying show how similar Swedish and German are. In my brain they get mixed alot especially if I am speaking German and all of sudden have to say something is Swedish. It is as if they were in the same box, when English is in another box.

Any way back to the book. Cute poems about Ghosts, boogeyman and vampires. One story is about a ghost who is unemployed because of the light nights in the summer. I never thought about it, but the vampires must also have difficult time in the summer, when the sun never sets. They don't have it easy in the winter either, because even though the sun never rises, people are covered with scarfs and wool, so no skin is available. 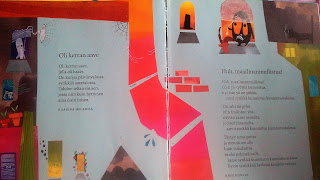 This book also made me think how difficult it is for vegetarian vampires. Talk about outcasts. My husband and I were watching one vampire show (must have been True blood), when I asked, if it is common knowledge that vampires must be invited, before they can enter. My husband answered that he thought it was common knowledge vampires do not exist.  He keeps me down to earth.

One poem tells about a ghost that goes to sauna and leaves its "rags" on the fence. One boogeyman is afraid of ghosts and it waits anxiously for morning while the ghost is afraid of the boogeyman. One ghost child wants to be a vampire when he grows up.

I guess most of the children aren't afraid of ghosts or vampires any more, but after reading this book they most certainly are not. 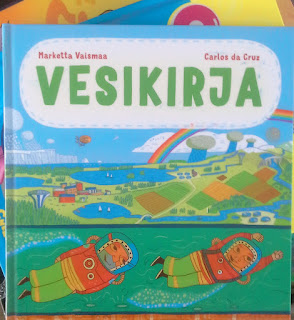 It has been raining for four days and everyone is cranky. Most of all Granpa, who dropped his dentures in the toilet.  Pasi has been reading about Waterman and suddenly he appears and takes Pasi to an adventure to see the different forms of water, how it circles on earth and how it gets from the sewers back to nature.

The book tells that Finland is called a land of thousand lakes. Pasi and Waterman visit a watertower (and Waterman tells how it works). The book has short comic strips to tell about Pasi and Waterman.  But mainly the purpose of this book is to inform. We also learn what not to throw in toilet, how to spare water and how unique the Baltic sea is.


We even learn that the water we are drinking now, was also drunk by Julius Cesar and how the aqueducts worked and how people used to look for water with magic twigs.

The book ends in latin:  "Navigare necesse est, vivere no est necesse".  Of which I don't agree with, since I am such a farm girl.
Posted by Hannahippo at 1:06 PM No comments:

Day at the National Museum of Finland 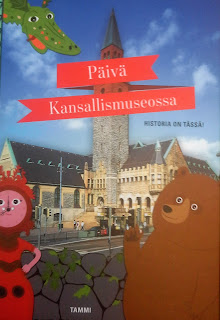 The bear statue at the front of the National Museum is the main character in this book.  The statue has been there since 1918 and it is made of gray granite, which is one of the most common rock type in Finland.


The bear enters the museums and notices the frescoes at ceiling painted by Akseli Gallen-Kallela.


Bear is joined by Mamsellikello, a floor clock shaped like a woman and a large moose, who is there to see a painting of his ancestor. Together they admire archaeological items, such as a wooden moose head.


The 18th century Rococo drawing room from Jakkarila looks very nice even from the book. The whole room is braught there from Jakkarila Manor, near Porvoo.

Quite a contrast is a Savupirtti from the same era. The name comes from the heating method: the smoke came freely into the room.

More glamour can be seen in the throne of the emperor, which was brought to Finland in 1808. This is the only imperial throne outside Russia.


The museum also has many practical items like skates made of bones, shingles and fishing nets.

Finally the group reaches the attic, where you can get to know the Finnish history by doing. There you can build a log house, vote in 1907 election or weave a rug. The attic is meant for over 7-year old and there is no upper limit.

Posted by Hannahippo at 11:31 AM No comments: