Pessi and Illusia is a story about a fairy (Illusia) that lives on rainbow. Illusia comes down to earth and meets Pessi, a troll, whose name is short for pessimist.  Illusia has "a smile that warms like the rising sun". Illusia stays so long that the sun sets and she can’t see the rainbow anymore.

The next few days are so dry that the rainbow never appears ,then comes a spider that envies Illusia’s famous father, Illusion, and bits off Illusia’s wings. Now she can never get back on the rainbow.

Pessi tries to make Illusia feel at home, but winter is coming. Luckily the forest animals help them: a muskrat digs them a hole and birds teach them to make a soft bed. Pessi also kills an evil weasel and a mouse makes a fur coat for Illusia.

In the spring Illusia is very sick, but turns out she is having a baby. A new creature is born: a hairless troll.
The fairy tale has the following chapters:
Missing fairies
Briefbearer Bumblebee
Cross Spider
Crayfish and seashell
Sundew and drone
Daphina and heath spotted orchid
Cuculus
Woodpidgeons
Miss Cuseuta and Princes Centaurea
Human and goose
War of the frogs
Jay and Muskrat
Surnia
Weasel
Mountain Ash
New Human
Wings
In the animal stories, frogs think they are related to humans, because both have calves and then one of the frogs start to think that that is not the case and a religious war starts,a muskrat wants to be called a small beaver and a jay is the forest gossip. At the same time, the soldiers find pearls inside the mussels and pick peat, where the sundew lives. The war is very present in this story. In the final chapter, Yrjö Kokko tell about his vacation from the war and how his family is waiting for him.
Yrjö Kokko was a vet and he had studied in the 1920's in Tarto, Hannover and Vienna. He also was a passionate photographer and he illustrated his book with photos. His occupation explains why he uses Latin names for the animals in Pessi and Illusia. He describes the nature beautifully:  "Cloud slept on the surface of the lake and even the shadows of the reeds were yawning."


Posted by Hannahippo at 8:29 AM No comments:

Ant that went to the doctor's 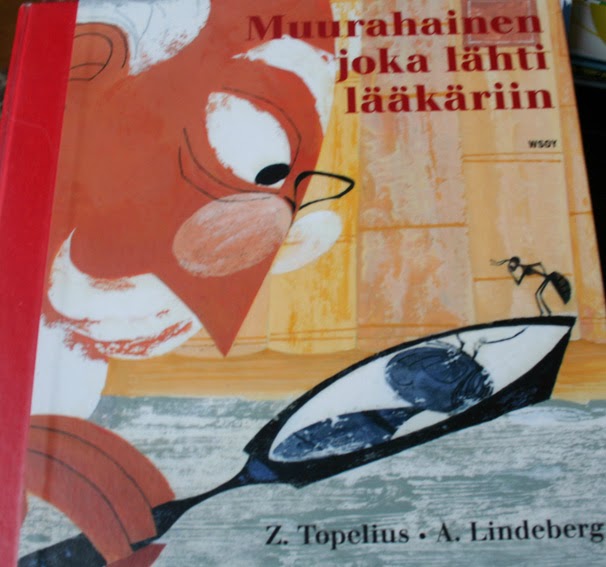 An old fairy tale about a child ant that breaks his leg. His mother is takes him to town to look for help and finds a doctor who can do that with the help of a grasshopper.

The mother never gives up and the child finally gets his leg back. 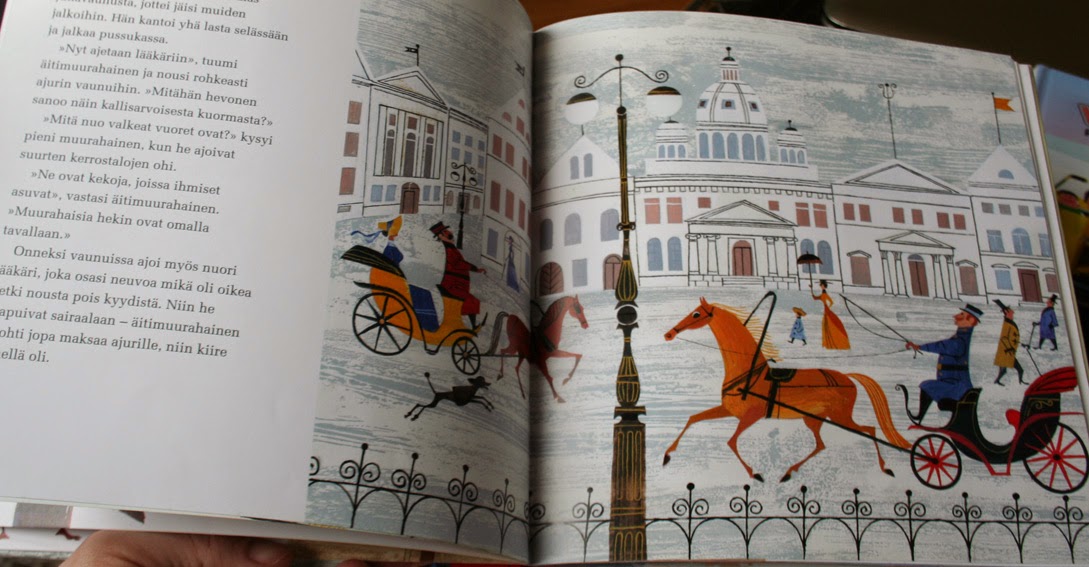 The story's lesson is never to give up and if you want something work hard at it. This seemed to be Topelius' main purpose in his stories: to teach the children about life.


Are the modern fairy tales just for fun or do they have some deeper meaning as well? I am glad that these old stories still get published. In some way they are part of our cultural history and maybe some child will learn someting. At least they can enjoy the fantastic illustrations of Alexander Lindeberg. He illustrated this book back in the 1960s, but the book got published only few years ago.

Posted by Hannahippo at 7:28 AM No comments:

Niina Veittikoski: Pearl aka Hertta in Finland books
Hertta is a girl that is interested in the world a round her. All books are written in rhyme. In the series of books, Pearl plays hockey, bakes, brushes teeth, has a puppet theatre, wants a pet and is waiting for Christmas.

Pearl has two special friends Aivo and Tollo (Brain and Dummy freely translated) and together they teach kids various things.

Pearl is a star in short animation films and boardgames as well. Very fresh and nicely slow paced children's program.

You can also playWorld of Pearl  games online.

Posted by Hannahippo at 7:15 AM No comments: 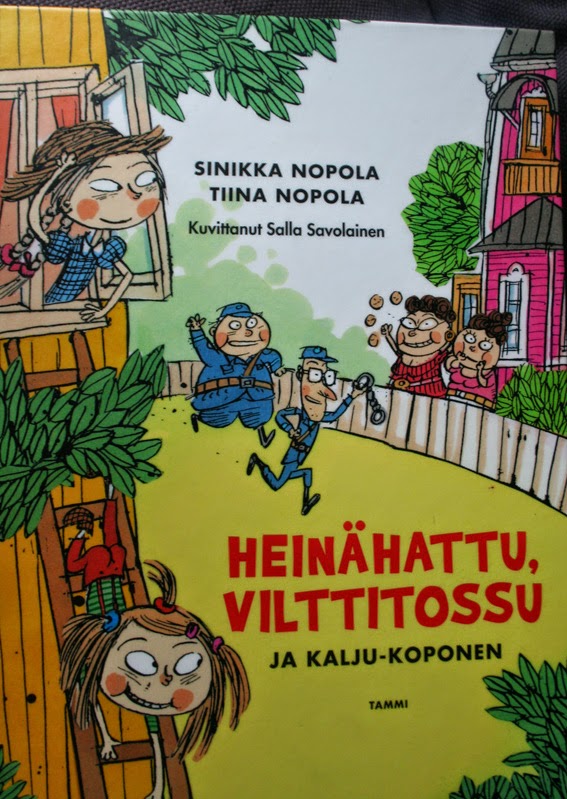 Helga and Halise Alibullen have been invited to Heyflower's and Quiltshue's playhouse for some cake. When the ladies get to the house, they see the girls fitting. Heyflower, who is the older sister, has made her little sister, Quiltshoe, mad by telling her that she was bold as a baby. The neighbor ladies try in vain to settle the girls. Quiltshoe wants to see pictures. Heyflower shows her the pictures and indeed Quiltshoe was bold.

When Heyflower falls asleep that night, Quiltshoe cuts her pigtails. In the morning Heyflower is very upset. Quiltshoe tells the family that someone stole the hair. Then she runs way and bumps into Policeofficer Bigbelly. Quiltshoe tells him about the theft and he deducts that it must be the famous Bald-robber. 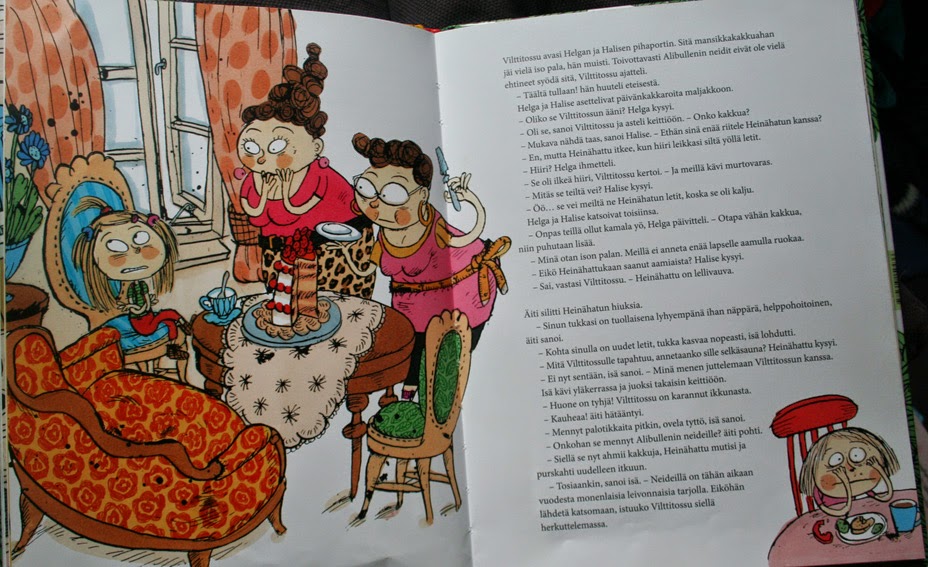 Mom and Dad are looking for Quiltshoe and the police is looking for the robber. In the end Quilshoe admits that she cut the hair. Mom gives Hayflower a nice box to hold her pigtails and Hayflower forgives Quilshoe. Mom also shows that Hayflower was as bold as Quiltshoe, when she was a baby.

The girls in the books are very likable and as a mother of two boys it is nice to see that even girls can pick a fit over the silliest things. I had forgotten how we fought with my sister.

Posted by Hannahippo at 7:12 AM No comments: