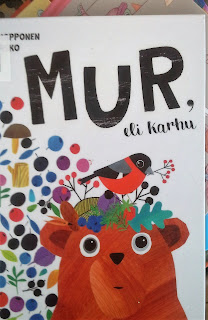 
Mur is not like other bears. He is not sleepy, when bears are supposed to hibernate. And when the others are, s/he gets bored. He starts to think he is not a real bear. He has a brown fur, but he still feels funny.

A lovely picture book about bears and identity. What actually defines us?  I think at some point all of us ask this question. We are defined by so many things: gender, nationality, appearance.


Posted by Hannahippo at 9:45 AM No comments: 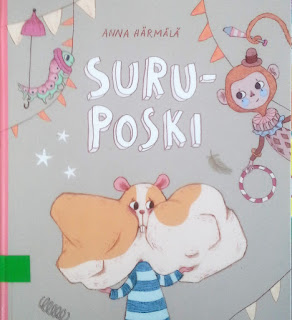 Heimo is sad. His grandmother Kimmelstiina has died.  Grandmother's appartment is full of furniture and things, which she has collected during her life. But it has to be emptied for the new tenants. Heimo stores the most valuable items in his cheeks. Ther is a golden ball of wool, wooden fork, favourite shoes and a red rubber ball.

Heimo is really upset, he runs out side. Then he finds a circus. All the performers are frantically looking for things, the show is about to start. The clown has lost his nose, the ropedancer can't find her rope. The circus horse has lost its shoe and so on. 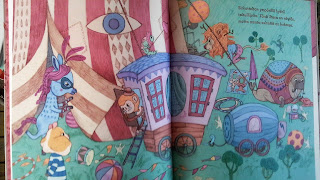 Heimo would like to help, but he cannot talk, because of all the stuff in his mouth. He cannot let the memories of Grandma get lost. He is tired and lonely, his cheeks hurt. He thinks Grandma would not be happy to see him like this. He digs his cheeks and finds Grandma's shoe. He remembers the circus horse missing a shoe. He returns to the circus and gives  his Grandmother's items to the circus.

How to talk to kids about grieving? It is hard for adults, but sometimes the kids simple reasoning can be the answer. Most Finnish parents try to protect their children from any negative feelings, but it is part of life. I believe this book could be helpful to read in families dealing with death.


Posted by Hannahippo at 9:07 AM No comments: 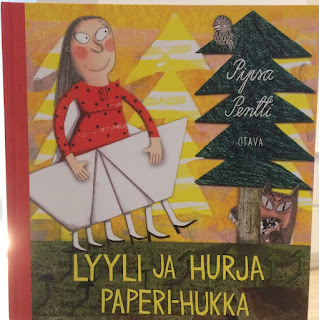 Lyyli is a girl who is afraid of almost everything. Just in case she stays indoors. She enjoys drawing brave and fearless paper princesses. The kind she wishes to be herself.

Lyyli spends her days with the paper princesses and hears about their exciting day: coffee is dangerous, because a coffee stain is an eternal bruise. Candle light dinner gets most all covered in coal (hiiltyä in Finnish literally  means to be covered in coal, but figuratively loose your temper). Also the princesses need to look important otherwise they might go to the recycling bin.


One day the Paperwolf (Hukka is poetic word for Wolf, but it also means something is wasted or lost). is threatening the princesses with a stapler. The Paper-Wolf used to live in the waste bin, but people were throwing trash to the ground, so he had no reason to stay in the bin. The Paperwolf kidnaped the princesses. Lyyli gets help from Mrs. Filterbag and together they start a rescue mission to save the princesses. They borrow a A4 from Mr. Paperknife of Parquet. They first glide with it and then Lyyli folds it into a boat.

After many events they reach Paperwolf and the princesses. Lyyli gets an idea and traps the Paperwolf to a stickerpaper trap. They pack him in an envelope and ship him to desert, where there is no paper. Lyyli is celebrated for saving the princesses. Soon Lyyli's room is empty: she is outside. You never know how brave you are, if you do not at least give adventure a chance.

I really enjoyed this book, it had many clever word plays. A4 in my mind is a direct reference to Audi A4 . Mr. Paperknife of Parquet refers to the Finnish term Razorknife of Parquet, which means some one is a really good danser. I believe we Finns have a special bond with paper, the heavy industry in Finland is basically built on paper. I mean the paper industry was a major influence on the economic growth of the Finland. Also the story emphasizes the importance of keeping our surroundings clean.


Posted by Hannahippo at 9:00 AM No comments:

Small scenes from a big galaxy 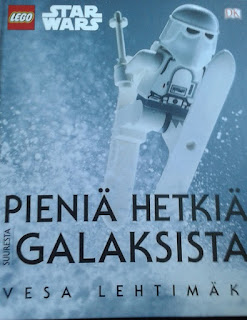 Yes I know: Lego is Danish and Star Wars American, but the photographer is Finnish!

These are unbelievable sceneries from Star Wars worlds with Lego charachters. I especially like Hoth, maybe because it could be Finland. Snow everywere.

At the end of the book is a section of how Vesa constructed the sceneries.

The scenes from Hoth were made with baking powder, baking soda apparently works as well. Nice to know, when it is not snowing outside, I can create the same effect indoors.


Posted by Hannahippo at 7:48 AM No comments: 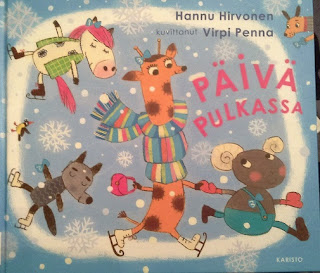 Stuffed animals Eerik (dachshound), Reima  (horse) and Päkä (ram) are bored. Winter is so dull, there are no flowers and they just want to sleep.
Suddenly there are new kids with new stuffed animals from the city. Cute giraffe Sohvi makes Päkä blush and the dangerous wolf gets all of them exited about winter. They go tobogganing and skating. In the evening they bathe in sauna and drink hot chocolate by the fire. Winter isn't so bad after all!


I am one of those people, who enjoy the change of the seasons. It would be so boring if it was summer all the time.

"Päivä pulkassa" comes from the age, when the farmers cut the sleds of the hired help to indicate that the work of the day was done. It literally translates the day is in the sled. Which in this book could mean that the toys spent the day in the sled.

Posted by Hannahippo at 11:34 AM No comments: