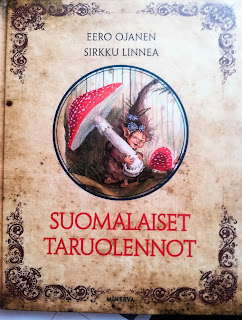 The Finnish folklore has a sprite for everything in nature. Through these creatures people explained, how the world was created and why the different phenomena appeared.

This book is divided into sections of different creature types. First come the giants, then the dwarfs (such as gnomes, elves, fairies and leprechauns).

One section is given to the creatures from Kalevala, one for Forest folks, one for the protectors of plants. There are creatures that live underwater, those who help and care for people and animals. Then there are those, who are plain weird and those whose only purpose is to make life difficult.  The last section is describes different mythical animals in the stories.

Some of the names of these creatures live in the Finnish language: hitto is used like a swearword "damn", just like "hiisi vieköön" (may the devil take...).  To this day, children play "Hippa" (tag), which was a creature that chased animals in the forest so the hunters could catch them.

Some of the locations got its name from a creature like Kouvola. Kouvo is a messenger of death and was widely feared.

Some of the less known creatures are:
Ägräs, the god of agriculture
Kiputyttö, the maid of underworld, reliever of pain
Rahko, the painter of moon
Madderakka, the saami protecor of women
Liekkiö, dead child that haunts people
Aarni, the protector of hidden treasures
Para, secure the milk production, later on protect sheep and grains
Nyrkes, the force that makes things happen


Wikipedia gives a great list of Finnish mythology. Godchecker also lists some of Finnish gods. Even though, joulupukki is never written with a Y.

Posted by Hannahippo at 12:13 PM No comments: 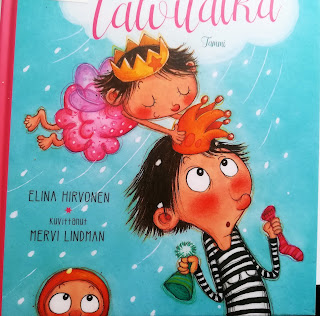 Princess Daredevil has many crowns: the golden is for Important Thoughts, yellow is for Fun Thoughts, Pink is for Great Adventures and the silver is for Calm Sleep. She wears her crowns when the need calls for them.  But her most important treasure is her Great-Grandmother's ring and it is magical.

Right now Mom is calling Princess Daredevil to get dressed and go outside.  Princess Daredevil is still looking for her pearls: the amber pearls are for superpower and the white are for occasions when you want to cry but you absolutely do not want to. Princess Daredevil decides to put on princess gown, golden crown, turquoise ring and the fairy wings. You never know, you may want to fly when sledding.

Mom's really getting angry and already counting down.  Princess Daredevil rushes to the door. Mom asks, who is going sledding in a princess dress?  Princess Daredevil tells her that something might happen. Mom orders her to take off the glitter and dress and put on overalls. Her brother is already dressed and getting hot.

Mom is not always angry, she can be fun, too. In Princess Daredevil's opinion she just doesn't understand the Princess Daredevil has something important going on, which can't be dropped just because it's bed time or time to go out.

Besides Mom is wrong: princess dress can be under the overalls. The dress gets caught between the zipper. Mom  gets angrier and then Daredevil's brother poops so that it comes out of the neckline of his overalls. Mom tells Daredevil to be ready when they get back from the clean up.

Instead of getting dresses, Princess Daredevil puts on the crown of Important Thoughts. She makes the living room a sunny beach and creates ice cream portions for her and her mom.

At first Mom gets really mad. Then she sees the ice cream. She realizes that Daredevil only wanted to make her glad. She also sees the magic and together they spend a day on the beach instead of going sledding.  Mom apologizes for yelling at her and together they dance on the warm beach.

Sometimes parents and children do not understand each other at all. Grown-ups think its all about schedules and order. Kids on the other hand see things adults do no. Some times it is good to stop and put on the Imagination Crown.