So far six books have been published about the five Virtanens. Every book deals with a problem a child of a specific age might encounter.

Vilma Virtanen and the ability to swim
Vilma Virtanen is five years old. She and her brother Paavo go to swimming school. All is well, but Vilma does not want to go to the water. She has taken a peek at her sister's microscope and she has seen the germs. In the lake there are amebas, water flees, cyclops and other nasty bugs.  At the end Vilma overcomes her fears and learns how to swim.

Paavo Vieranen and girls' suff
When Paavo's olde sisters Vilma and Veera are away, Paavo goes into the girls' room and admires all the beautiful things they have. Soon the room is a mess and at that moment the girls come back. Luckily boys too can play with girls's stuff.

Kastehelmi Virtanen and own will
Kastehelmi is two years old and she has her own will. The older kids take her to the flee market. And the battle of wills begin already when dressing up. Then comes the walking part, the I-want- part. Soon teeth are taken to the negotiation table. The book gives advice how to deal with the little tyrants.

Perttu Virtanen and horrible envy
Perttu is three years old and not so big as his older siblings and not a baby anymore like Kastehelmi. Kastehelmi has a birthday and she gets all kinds of wonderful gifts, including a bike. Perttu is so envious. He takes the bike and decides to ride it to Sweden. That will teach them a lesson.  As a cultural note: in which other country other than Finland would a book about envy talk about Sweden? 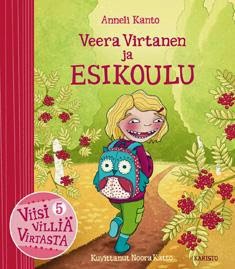 Veera Virtanen and preschool
Veera is the eldest of the Virtanen siblings and she is going to preschool. Which is fine, since Veera knows a thing or two. But then she makes a mistake and becomes the but of the bully's joke. Preschool isn't as much fun anymore.

Paavo Virtanen and darkness
Paavo and Perttu are walking home on a dark winter evening.  The darkness makes the boys to imagine all kinds of things. Is that a werewolf?

Posted by Hannahippo at 7:58 AM