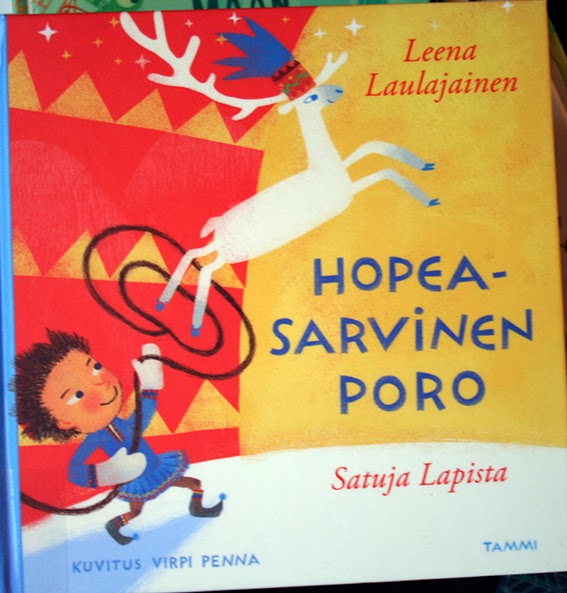 The magic of Lapland wrapped in fairytales. The stories tell about the fight of darkness and light, the way people live side by side with nature.

How the blue throat brought daylight to Lapland The blue throat has nested in Lapland but then it starts to get dark and she has to get food. The bird asks Couvgan, the spirit of day, to push aside the wing of the polar night (kaamos) ja warm the eggs. Couvgan sends sparks to Kaamos’s cape. Kaamos runs away but comes back again. Ever since Couvgan and Kaamos figth with eatch other.

Avvil and Aanar
Aanar is Avvil’s baby girl. Avvil has many chores and she leaves Aanar crying many times. A friendly gnome Udda picks the girl and takes her away. Avvil is desperate and promises to do anything to find her. Aanar grows up and returns. But she doesn’t know her mother. She gets thirsty and her mother turns into a spring so her daughter can drink. Aanar drinks and drinks and turns into Lake Inari. Avvil is river Ivalo.

Neljän tuulen lakki (The four wind hat)
The warm southern wind melts the snow and gets the leafs to peak out of their shells. Then the northern wind blows ice cold and covers the land with snow and ice. Then mean east wind tears the flows up just when they have opened up and then the mild west wind only finds hey shivering in the cold. The worst is when all four come up the mountain and cause a storm. The animals and people start to move away.

The witch Calaoaivi sees this and gets mad. He climbs up the hill with his drum and sings an invitation to the winds, which can’t resist. The winds arrives and Calaoaivi continues to sing. The winds fall asleep. The witch collects the winds into his cap and takes them home. When the winds wake up they start stroming in the cap. But the cap is so strong, it won’t break. It only shapes into four different peaks so from above it resembles a star. Calaoaivi promises to let the winds out, if they do not fight any more. Each wind will blow from their own cardinal points.

The saami culture is not that familiar to me and therefore it was fascinating to read stories of the saami culture. When I was in comprehensive school (back in the 1980s) the Lapplander culture was mentioned maybe once. Nowadays there are news and one children's program on TV. I aslo heard that they are trying to get a saami school in Helsinki, so those who move south from Lapland won't forget their hertage. At one point saami wasn't taught in school. It is sad that we talk and talk about the rights of the swedish speaking people in Finland and how Swedish must be taught in schools. Nobody is demanding saami to be an obligatory language in schools. One reason given for Swedish language education is the business possibilites in the Nordic countries. Money talks. What would the business opportunites with the saami people?

Posted by Hannahippo at 8:27 AM