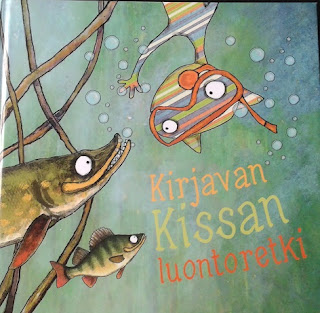 The colorful cat meets many animals in nature: a wolverine draming of being Batman, he/she swims with the pikes. The cat wonders, how the moose grew so big by eating leaves.

In the winter he follows the rabbit's tracks, helps bear to stock up for winter and tries to sleep with the bear, except he snors.


The cat also wants play catch with a fox, sees a snake and tries to settle two fighting capercaillies He solves a mystery with a mole, joins the Saimaa seal for a revolutions. He also sees reindeers, otters and hedgehogs.


The illustrations are cute and capture well the light in the different seasons.

Posted by Hannahippo at 2:40 PM