At the Duke's Court: life in the 16th century Turku 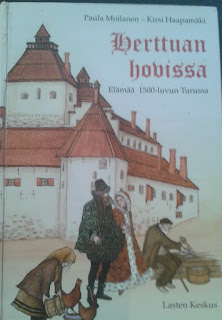 An time travel to the 16th century Turku and Turku Castle. Hans Hansson's and his family's lives change, when they get a chance to work as servants in the Duke Juhan's  (later the Swedish King John III of Sweden) court.

In the book are described different seasonal events such as the shrovetide. Different chapters tell the everyday life between the upper, even royal, class and the servents. The story takes us to the spinning hut, to the apothecary's kitchen and to the habitat of many different professionals.

The illustrations of the book support the story and the story combined with facts make history feel alive.

In 1562 Sweden declares war to Poland and despite the King's oppostion, his brother John decides to marry Catherine Jagiellon, princess of Poland. The fight between the brothers casts deep shadows upon the Finns, but also  the arrival of  the princess of such a great nation coming to
Finland is celebrated.

A  great book for any one interested in the middle ages and a reminder of how a big role Sweden has played in the Finnish history. It might also explain why the Finns are so reluctant to learn Swedish: it is the language of the conqueror.