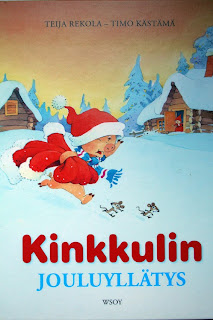 Kinkkuli is the happiest pig in Korvatunturi (kinkku=ham, so the name in English would be Hamly?). The elves feed Kinkkuli and they talk about how he (I assume that Kinkkuli is a boy, but it never is revealed since the pronoun hän refers to both he and she.) is going to make a delicious Christmas ham. Kinkkuli thinks this is fun. The day before Christmas Eve the elves do not give him anymore food and tell him that Kinkkuli will have the best seat in the Christmas table. Finally Kinkkuli understands, what is going to happen and runs away.


He decides to make himself useful in some other way. He starts wrapping gifts. But his gifts cannot be opened. He bakes gingerbreadmen, but he ends up eating them all. Then he sows caps for the elfes, but those cannot be worn. The elves are coming to get him slaughtered. The mice help Kinkkuli hide.

Kinkkuli escapes the elves and visits Santa. Santa is sleeping and Mrs. Claus says Santa is sick and no presents will be delivered. This gives Kinkkuli an idea: this year the presents are given by Christmas pig. 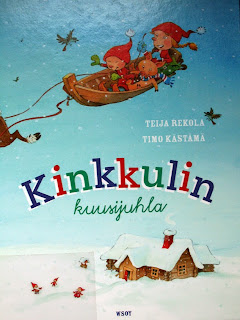 
Kinkkuli is trying to make a snowman. The elves help him, but then they have to leave to get the Christmas tree. There are no trees to be found, since the storm Olga had torn all trees out. Kinkkuli helps the elves to find a tree.

He searches from elf school, where they are making crafts. Kinkkuli decides to make the tree himself. It does not look very proper.


Finally he finds a tree from Aunt Eulalia, but it is not a traditional spruce, but a palm tree. But it works.

In Finland Christmas trees are fetched about a week before Christmas. It can melt in a cool place for a while and at least in our house it is brought in and decorated on Christmas Eve. It is also traditional to serve ham at the Christmas table.