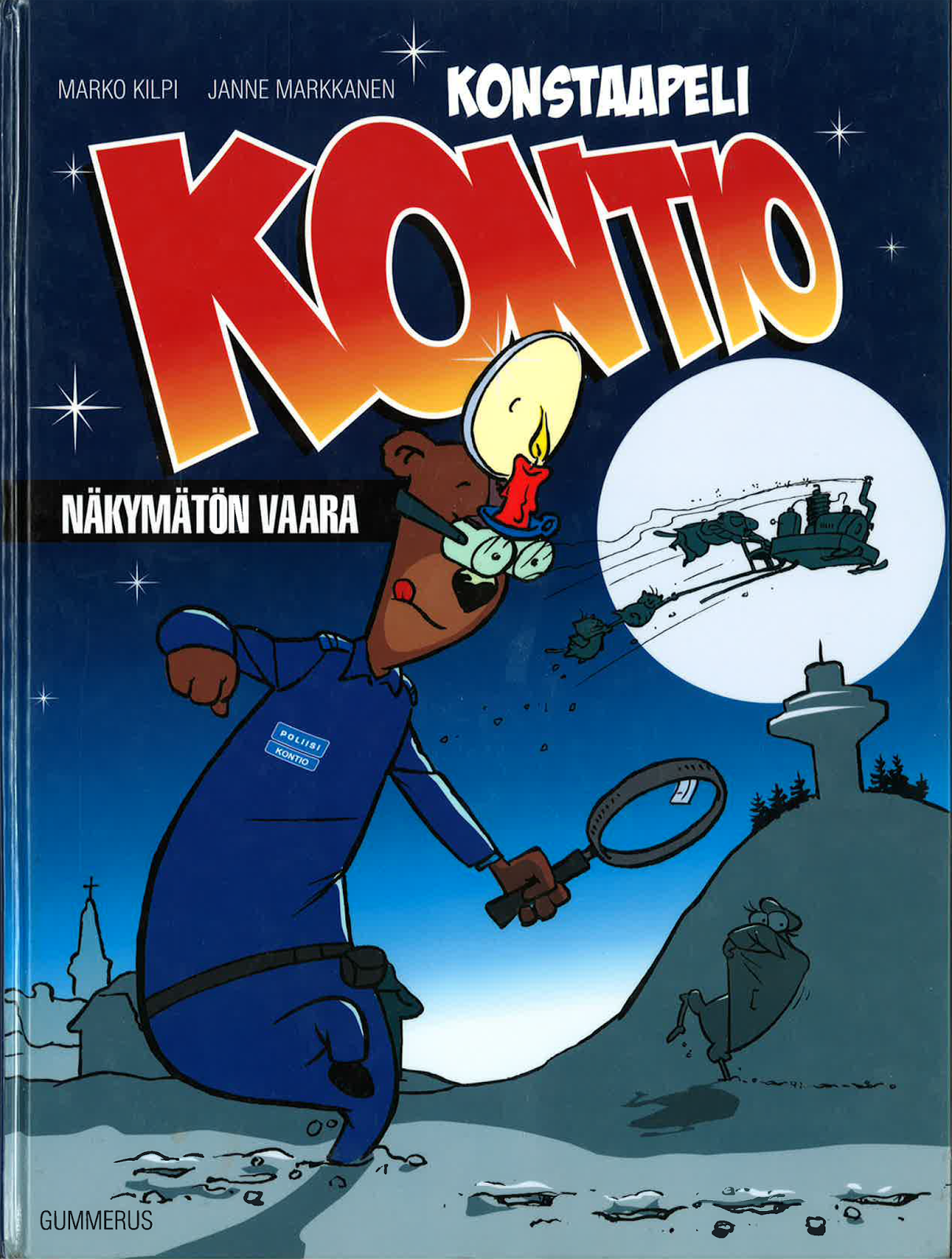 Grandma Hedgehog is speeding with her kick sled and runs Constable Bear over. Nobody can see her, before it is too late.

Constable Bear wants that everyone can walk safely even when it is dark and he knows that he cannot change Grandma Hedgehog. He asks the town smith to come up with something that makes Grandma Hedgehog visible so others can avoid her.

The smith comes up with all kinds of gadgets. But the best is a reflector that has already been invented. Constable Bear orders everyone to wear one. Soon it is discovered that someone is not obeying the order. The villages have hear footsteps, but no one is seen. Constable Bear solves the mystery.

The book reveals all kinds of things about us Finns:
1. Bear has several names
2. The police is respected
3. Using reflector is taught to every child. It is a cheap life insurance
4. Grandmas with kick sleds are fairly common.

Let’s start with bears. My limitation of English language is screaming hear, since I could not come up with a synonym. Grizzly refers to a specific type of bear just like teddy. Finnish language has several: karhu, mesikämmen, otso, kontio just to name a few.

In this book the police is a bear. Both are well respected and maybe feared a little. By the way why are fear and respect walking hand in hand? It is amazing that the Finnish police considers the people they are dealing with as customers (Unless you are applying for a passport, then you are treated worse than the lowest criminal. I guess the administrators of the police station haven’t attended the same customer service courses as the police officers, who are enforcing law in the streets.)

We Finns believe that the reflector was invented in Finland. And in the country side people actually wear them. The city people think that since there are street lights, the car drivers can see them. But that is not the case. There are so many shadows that make the visibility poor at night time. Remember that darkness commands half the year. I have also heard that some think that it is embarrassed to wear a reflector. I do not understand why the outerwear designers can’t make jackets and pants with reflectors that look good.

Lastly, Grandmas with kick sleds is almost a cliché. In order to use a kick sled the roads must be stomped with snow, so that it is icy. Nowadays most roads are salted or at least sanded, so you cannot ride a kick sled. I do know that at least my mother sleds down to pick up mail with a kick sled.

Posted by Hannahippo at 8:18 AM