The Old Elf of Turku Castle 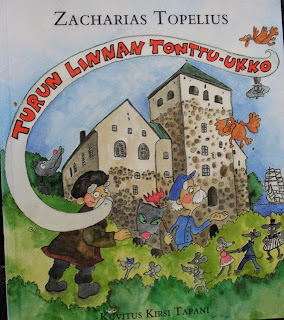 Castle is the eldest in Finland and is the most famous of the elves. He lives in Turku Castle, in Hollow tower, where the air is nice and musty. The elf visits the elf at Turku Cathedral every 20 years.

His best friend is Matti Kivinen, who accidently ran into the elf in one of the passages of the Castle. At the time Matti was 12. Since then Matti become the caretaker of the Castle. The wind as well as time tears the castle. Winter snows in, spring rains in, the rats chew holes to the floors. The elf has been fixing the castle and now he has Kivinen as his help.

The elf has seen Saint Eric and Henry, the court of Duke John, the captured King Eric and Per Brahe. And he tells stories of the war, siege. The great fire of Turku happened when the elf was visiting his cousins at Häme and Raasepori Castles. He won’t leave again. The elf shows Kivinen his treasure, many who have attempted to steal it are now in chains.

Soon there is a wedding at the Castle: the grand-daughter of Kivinen is getting married and the elf has given her a beautiful crown. The guests are sure that Kivinen has found it in the Castle. Kivinen drinks too much and starts to tell about the elf to Saara Kouranen, whose need to gossip is trumped by her greed.

Saara and her son start to look for the treasure. The elf stops them and turns Saara into a cat and her son into a wolf. Kivinen doesn’t see the elf again, and the elf is no longer friendly toward the inhabitants. The flowers are no longer watered and the walls are not repaired. The elf is tired. Rose, Kivinen’s grand daughter promises to the elf that her son will take care of the castle. The castle of Turku laughs at the tooth of time.

This was the classic Zacharias Topelius fairytale. There are two modern stories about the old elf at the Turku Castle as well. The secret of the old elf and the Old Elf’s miracle of Christmas. 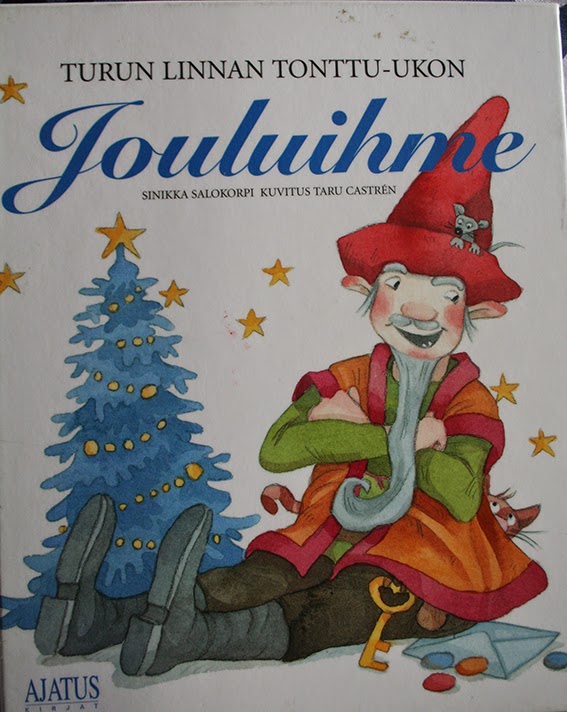 
The Christmas Miracle of the Old Elf at the Turku Castle.

The old elf walks around the casle and meets ghosts of people that have lived in the castle. They meet the three Catherina’s that lived there in different times. Skapula the parrot was brought to the castle 500 years ago to entertain people. And the small monkey Talapoi was every one’s favourite. The old elf and his cat go visit pre-cat at the Aboa Vetus museum.


The Precat tells them stories about the time when he lived in Turku. Next the elf and his cat sneak into the Pharmacy Museum to get a recipe for a pill that will make all the people happy and glad. The pill was invented over 3000 years ago.

The Turku people eat the pills and become friendly and happy. All except Grumpy old man. He plans to create a balloon of bad mood and blow it up over the great Christmas tree near the Turku Cathedral, when the declaration for Christmas peace is read.

The old elf of Turku Castle hears about this and tells Santa Claus about the plan. Santa Claus’s reindeer grabs the balloon and takes it away. The old elf asks the Grumpy Old Man to have dinner with him. The Grump tells the Old Elf that he has no home. The old Elf arranges Grump to live at the Luostarinmäki Handcrafts museum. 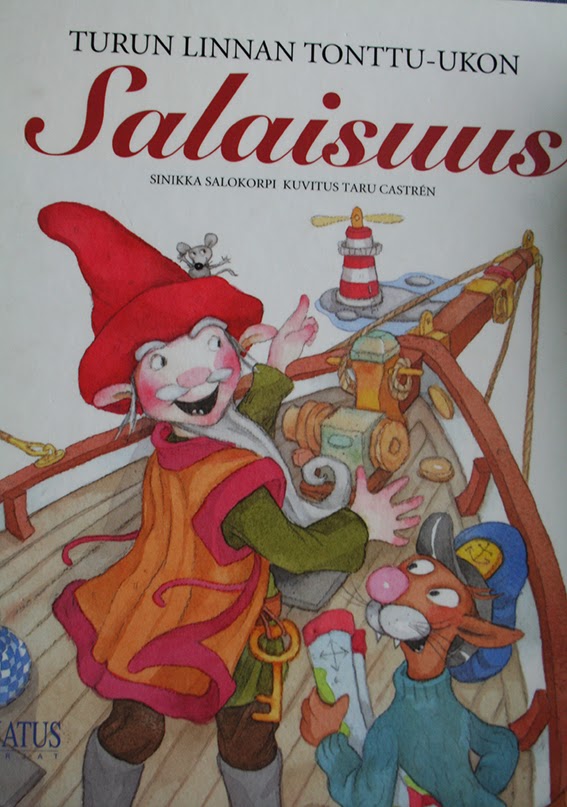 The secret of the Old Elf of Turku Castle

The Cat of Old Elf wants to go sailing. The Old Elf knows there is a maritime museum at the banks of Aura river and they could borrow a ship from there and go great Christmas Pike.
The ship sings and takes them to the Pike lighthouse. The lighthouse keeper seagull takes the to a near by rocks and the Christmas Pike comes to fetch them. The Old Elf and the Cat eat peaces of magical chocolate that allows them to breathe underwater.

The Christmas Pike shows them pikeschool, gift shop and hospital. Christmas Pike thinks that people should learn to keep the environment clean. Traditionally Christmas Pike had sent his greetings to the king. But then that tradition stopped, when the Russians ruled Finland. President Kekkonen returned the tradition that the Turku area locals bring a Christmas Pike to the President.

The Old Elf and the Cat return to Turku Castle. Christmas Pike comes to see them on the same trip, when he brings his greetings to the president.

I had never heard of the Old Elf of Turku Castle, before I started to look for Finnish Christmas stories. This just proves, how isolated the Turku culture is from the cultures of the rest of the Finland. Or then rest of the Finland does not want to know anything about Turku. That is sad. The two newer books about the Old Elf tell fascinating details about Finnish history. After all Turku was the most important city during the Swedish regime.