The strange delay of Anna Winter 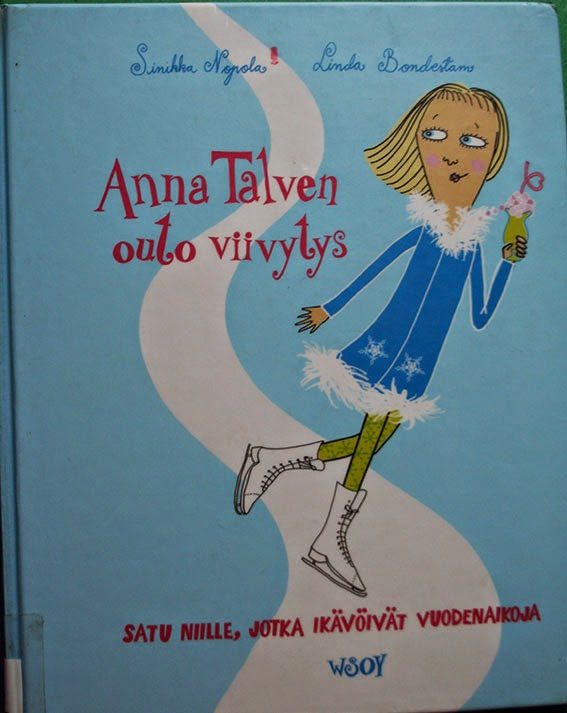 All the city has been waiting for two months. Anna Winter, where is she? The city people are wondering, what’s keeping her? She should be here by now. Anna Winter had always been conscientious. Sometimes she has been late for few weeks but thats nothing.

Anna’s sister Hydrangea Autumn is tired and angry: all she hears is complaints. The world is ugly, gray and dark, autum has ruined people’s lives. Miss Autumn is weapy and people think that autumn is making their lives miserable. All of a sudden Miss Autumn sees Anna Winter in a milkshake bar with Mr. Summer. Why is he still here? He is supposed to be at Gran Canaria already. Miss Autumn sees that the two are smitten.

Mr. Summer is complaining to Anna: he doesn’t seem to do his job right, people think its too hot or too rainy. Anna understands him. She is considered too cool, even though winter is supposed to be cold. Mr. Summer asks Anna a favor, his cat needs to be taken care of.

Anna promises to take care of the matter and leaves to ask her mother. Anna’s and Hydrangea’s mother is Mrs. Spring. Her artist name is Primavera, it sounds better. Mrs. Primavera is too busy, she can’t take care of the cat. She has to prepare for her performance. In the last week of spring, she appears in glittering gown. Mrs. Primavera is wondering, why she has such pale daughters. Anna defends herself and her sister. Autumn is wistful, oblique light with amazing colors and she herself knows all the shades of white. Anna says that she opens up only to those who have time. Mrs. Primavera suggest that Anna should ask her sister.

Hydrangea doesn’t want the cat. She is so tired. She tells Anna that she is the only one who brings out the truth: she undresses the trees from leaves and isn’t afraid of anything, not even darkness or death. Hydrangea hates Mr. Summer and refuses to take the cat.

Anna sits in the park bench and wonders, what she should do, when Mr. Mud and Mr. Slush drive by with their bikes. The children love them, but adults do not care too much about them. Both men are infatuated with Anna and promise to take the cat. Anna hurries back to the milk shake bar only to find out that Mr. Summer has left her a note. Anna starts to cry and it starts snowing outdoors. Miss Autumn arrives and apologizes. She is not surprised that Mr. Summer has left. Summer comes and goes and always someone pines over him. Mr. Summer had wooed Miss Autumn, too. He had told her that she has an exiting personality and had offered her cotton candy. In the end Mr. Summer had locked Miss Autumn to the beach locker room, because he wanted still in September be admired by people. Miss Autumn tells Anna that Mr. Summer has a fiancée, Doris Heatwave. She lives at Canary Islands. She is a giggling air head in bikinis. Both of them are superficial, which Miss Autumn and Miss Winter aren’t.

Mr. Slush and Mr. Mud come running and tell the girls that the cat has climbed in a tree. The fire department tries to get the cat down. Anna Winter and Hydrangea Autumn leave to get Mr. Wind. Mr. Wind is having a day off and is reading poems at the attic. Miss Autumn asks him to help. Mr. Wind agrees and starts buffing and soon the cat is down. Mr. Wind promises to take the cat in his care. Mr. Wind feels a little heavy hearted. He tries to catch a glimpse of Miss Winter through the window. He misses the decorative snowflakes and is surprised. He is an independent soul after all. He also notices that the city without Miss Winter’s touch is very empty.

Miss Autumn dreams about a vacation to England. She has heard that people like Autumns there. At her sisters guestroom she hears from the radio that the Canary Islands has had an exceptional heat wave that has dried out Summer. Miss Autumn is pleased, they should scorch together.

Miss Winter notices that she does not miss Mr. Summer any more. It starts to snow. People are happy and Miss Winter goes to the ice rink, where Mr. Wind joins her. Mr. Summer writes the letter he promised and explained that Summer and Winter cannot be together long, because they confuse each other and people too much.

I love that seasons change. How boring would it be, if it was always summer? This story highlights how people react to the seasons. Last winter we had no snow and it felt awful. Intresting in this book is that it empfasize that is it admirable to be serious (like Miss Autumn and Miss Winter). In my mind the book also warns about charming cheaters. Very cute.

Posted by Hannahippo at 7:18 AM