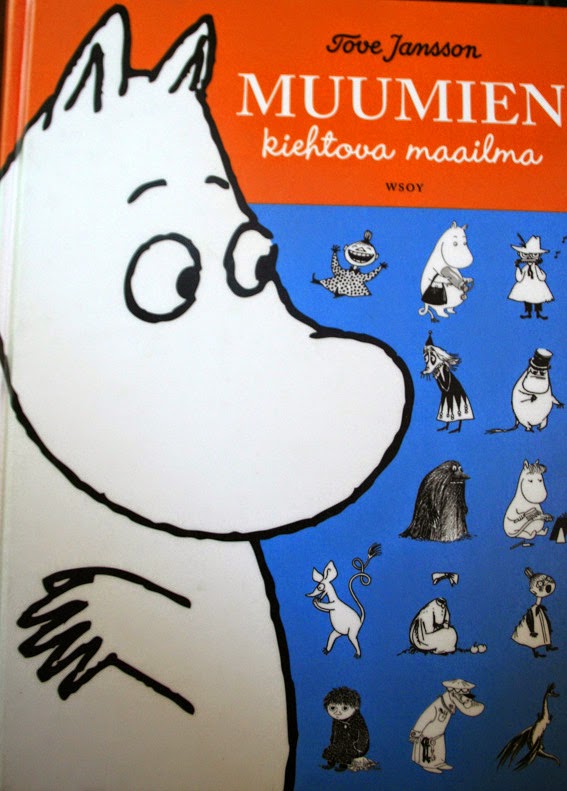 Moomins keep their popularity through the year. The charachters themselves look very different from what they used to look in the 1930s, when they first appeared in the swedish Garmin-magazine. Here I have collected some ot the samples of different Moomins. Of course there is the "Strange guest at Moomin house" -book that I have already written about.

(Tove Jansson text, edited by Helen Svensson 2008)
The  first book collects selected extacts from different Moomin books. The book includes the colorful stories of "Who Will Comfort Toffle?" and "What happened then". The book also includes moomin songs, small moomin dictionary  and a map of Moomin Valley.  Very compact book about Moomins.

The extracts are from Magician's hat, Magic Vinter and the great flood.

The first Moomin comic strips were published in "Ny tid" newspaper. Tove started the strip and then her brother Lars Jansson took over.

The "Who will comfort Toffle?" book has also been made as a diarama that is located at the Tampere City library.

Oddly enough, this book was first written in English. in 1978-1982 a Polish animation studio created a Moomin series. There are four different books or leaflets that have these type of moomins as illustrations.


This style was my first contact with the Moomins and that is the reason, these are also the deares.

Based on Tove Jansson's texts, translated into Finnish by Kirsti Mäkinen

In the 1990's the Moomin charachters reach a new hight of popularity with a Japanese animation "Muumilaakson tarinoita". The Moomins had been animated in Japan before and they were hugely popular.

In the 90s the Moomins got different colors: Moomintroll is light blue, Moomin pappa is some shade of lilac, Moomin mamma is yellow and Snorkmaiden is cream color.  I assume they reflect the personalities of the characters.

I hit puberty at that time and I rebeled by not liking the Moomins. I thought they were irritating and everywhere. My 10 years younger brother watched the series, but I couldn't stand them. Since then I have changed my mind. And I guess my mother is relieved that my rebellion reached its peak with the Moomins.

These series can also be seen in the Finnish television at the moment and my boys love it. Especially the Groke. Now in the Finnish languege we do not know the gender of the creature, but it is a she. I hadn't thought about it before I ran into the Swedish version.  Does it matter that the scariest creature of the books is female? 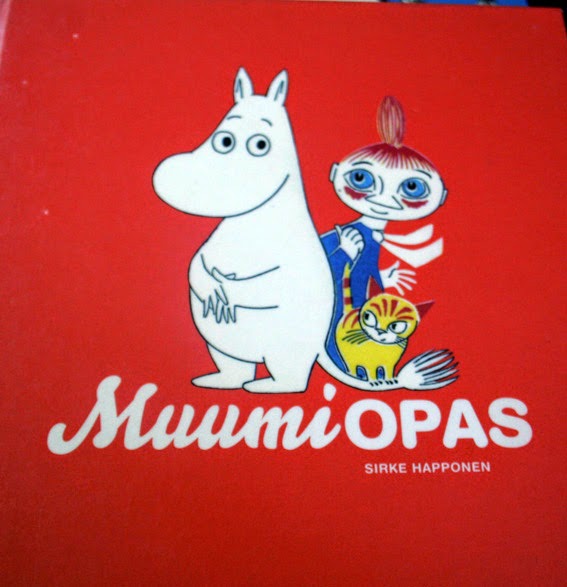 There is a book that collects all possible characters that Tove Jansson created. It has precise information on each character.

The book includes the original characters from Snork to Mymble and it elaborates each character's personality, birth, etymology and appearance.

Even thought the 1980's Moomins are my favourite, the newest books about Moomins are fantastic. Their style reminds me about the " Who will comfort Toffle?" -book

The Moomin family album has collection of picture found at the Moomin house. Moomin mamma tells stories about the pictures.

Another new book about Moomins, where Little My is the main character.

Posted by Hannahippo at 7:27 AM