Helsinki before Helsinki - the archeology of the old city in comic 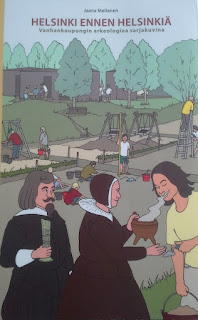 Very informative comic about old Helsinki, before it was our capital. The old Helsinki is not there anymore, it is underground.
Helsinki was grounded in 1550 by Swedish King Gustaf Vasa and it was just like the other cities: groups of gray log houses, church  and town hall in the middle. The blocks followed the forms of the land.


The comic is a mix of present day archiologists digging and the past people living in the old Helsinki back in 1550. The book is also illustrated with images of the artifacts from the digs and illustrations of the buildings that used to be.

The most important things were a well, which provided fresh water, the church, which was documented since the clergymen were almost the only who could write.

Some information was also found about the clothing, which people wore, the jewellery (read iron decorations not gems or gold).

One section focuses on the food and drink and the items associated with it.

The book has a nice mix of comics and photos, making the story alive. A great book to learn about Helsinki.