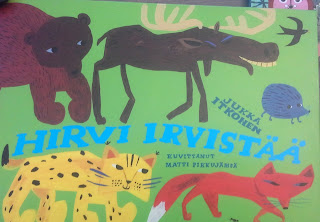 
The name of the book in Finnish means moose grimaces.  Later on you learn that tit grimaces to a cow that came to forest to his turf. Cute short poems about animals from moose to ants.

I am becoming a fan of the modern children's poems. Before the poems were too educational and moralizing, but now they are just fun. Of course, you can still learn a thing or too.
Posted by Hannahippo at 11:33 AM