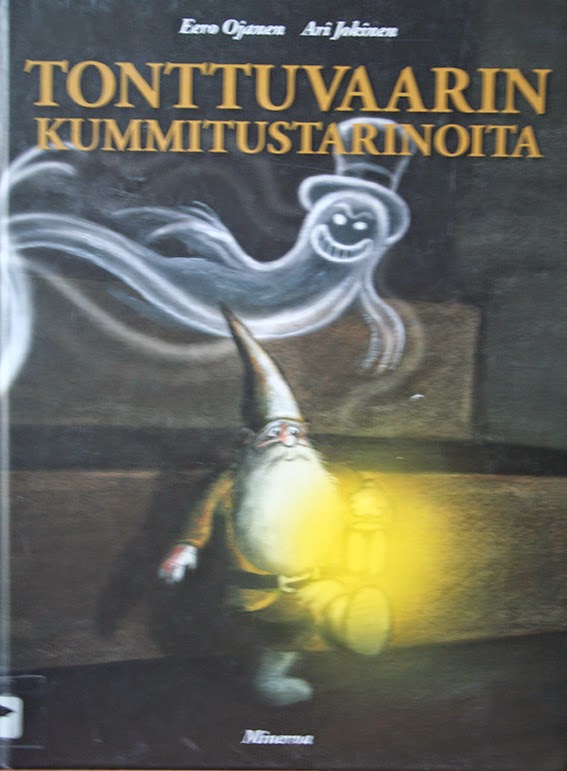 Old ghost stories told by a Grandpa Elf. He tells in the book stories that happened somewhere else. Where he lives, nothing ever happens.

The atmosphere is created by the first story, where someone is breathing in your neck. Then a barn is haunted by a horse and the cudgel of death.

Then Granpa Elf tells a story about a horrible rider, who has been seen to ride toward the manor.

The story of the guards of the treasure can be also read in the Mauri Kunnas: Tales from Doghill.

The story of the strict landowner tells what happens, when you do not treat others so nice. When he died, his body couldn’t be carried into the church: the doors wouldn’t open.

At the border of two villages is haunted by someone, who moved the border posts. Someone hear whining. They find a body, it is buried and the whining stops. One hears clinking and they find stolen property.


At a dangerous cross roads white lady keeps asking not to leave her.

At Chirstmas the deceased celebrate at the church. When the dawn comes, the church is empty.

A shoemaker is the first to be buried in a cemetery. He was a very colorful character, who even after his death makes pranks to those who walk by the cemetery by night.

At this point Grandpa Elf wonders if there is ghosts if no one sees them. Grandpa Elf tells that nightmares are created when someone presses the sleeper hard, so that the sleep is disturbed and the sleeper feels distressed. The Finnish word for nightmare is painajainen and to press is painaa. So there for some presses us when we have nightmares.

Lumbago in Finnish means Witches arrow (noidannuoli) and it was believed that witches shoot people with arrows and that causes the pain in the back. Other diseases are transmitted the same way. When someone looks ate you with the evil eye, you feel strange tingling. When objects are nowhere to be found, a spirit has taken it.

Premonitions are only seen in places where there is not a lot of movement, as is in Lapland. In a house, the people knew that someone was coming, before they could be seen. The wife told the guests that she had heard noises and seen these guests, who had then disappeared. Soon the real people had arrived.

Boogeymen are told to be seen in the dark. At the time, when toilets had separate outhouses, the kids were afraid to go there, because in the dark was boogeymen in the dark.

Ghost were seen, where people were. But then they disappeared from the Southern and then from the Western Finland. Most ghosts were seen 100 years ago. Today not so much.

Finland has few castles and many manors. The ghosts in those were appreciated. In the past, people were very afraid of ghosts, now a place isn’t distinguished or classy if it does not have its own ghost. For example the Olavinlinna in Savonlinna is haunted by a girl, who had been masoned in the walls, because she had let the enemy in the castle. She was innocent and now she is haunting the castle. In Hämeen linna haunts the sister of the chief that build the castle.

Today ghost have hard time finding jobs. They have lost their motivation, because no one is interested in them anymore. People find excitement elsewhere. Or maybe people are not afraid anymore. The ghosts have become technical. The Finnish word painovirhepaholainen means devil typo. People are not making mistakes, there is always something (aka the devil) that makes the mistakes. There is always light and noise, people are in a hurry. There is no place for ghosts. Grandpa Elf wonders, if he is really silent and paying attention, would he still see ghosts.

Posted by Hannahippo at 9:22 AM