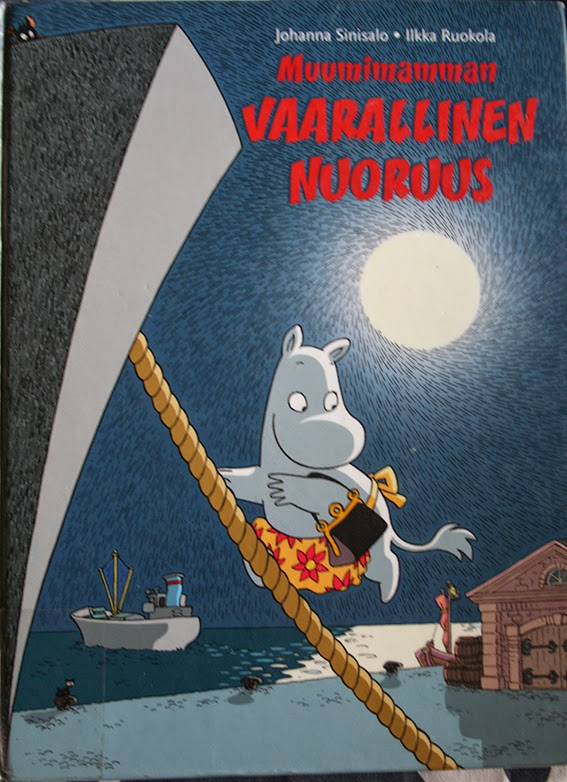 Moominmamma is my favorite Moomin character. She is the glue that keeps the family together. Moominpappa is an eccentric author, who thinks he is the head of the family, when in reality Moominmamma is the one running the show.

Moomintroll relies on Moominmamma to restore the order even when the comet is approaching and solves any problem that arises.

Moominmamma’s youth is not discussed in Tove Jansson’s books, but in this comic book Moominmamma tells her family three stories about her youth and how she ends up in the storm only to be rescued by Moominpappa (This rescue is told in the exploits of Moominpappa). Moominmamma does not say which story is true.

In the first story Grandma takes Miss Moomin (as Moominmamma was called, when she was young) to the circus and Miss Moomin decides she wants to be a skill rider. Grandma gives her permission to join the circus. Once she is in one of the older riders gets jealousand starts to prank Moominmamma’s horse the Snowflower. Concerned for the safety of her horse, Moominmamma leaves the circus. She arrives in a city on the beach and finds work in Mymble’s tavern and a flat above a fillyjonk. Moominmamma becomes quite good in playing poker. One hemulen falls in love with Moominmamma. His family turns out to be orderly hypocrites as opposed to adventure loving and relaxed moomins. The thought of marrying such uptight, pretentious man distresses Moominmamma and she runs away to the sea and then there is the storm that introduces Moominpappa.

The second storyline follows the same lines, but when Moominmamma and her fiancé the hemulen are collecting seaweed on the shore, they meet pirates, who kidnap Moominmamma. Moominmamma saves Beard Pete with herbal medicine and becomes the ship’s lay surgeon. She also makes them crepes and plays poker with them and then there is the storm.

In the third story Moominmamma lives with her grandmother and as they are wonder
ers they hike to the Lonely Mountains and pop in to an observatory. The professors there enjoy the crepes and offer Moomimamma to work for them. Moominmamma’s job is to clean the telescope, make crepes and play poker. Soon Moominmamma gets bored and leaves the observatory after asking professor permission of course. In the mountains Moominmamma gets snatched by an eagle. The eagle takes her to the sea. Moominmamma sees a boat and bites herself free from the eagle. The boat belongs to hattifatteners and the storm is upon them.

The comic is full of familiar references to Tove Jansson’s stories: Moominpappa rescuing Moominmamma ( Moominpappa’s memoirs) , the Observatory at the Lonely mountains (Comet in Moominland) and the stereotypes of hemulens and fillyjonks. Even the illustrations seem to be fresh versions of Tove Jansson’s comics.

Next I will share my three favorite parts of the Moomin books that describe the personality of Moominmamma.

In the book “Moominpappa at sea” Moominamma follows Moominpappa to the lighthouse island even though she does not want to. Moominmamma gets frustrated on the raw island, where nothing grows. On the island Moominmma takes her memories as her soil. Relying on her memories she paints a garden inside the light house. During this painting process Moominamma’s anxiety prevails and she is more content at living on the island. She thinks that the scenery on the island is even more beautiful than a garden. The illusion of the ease and happiness of Moominvalley no longer haunt her.


Her character is also shown in “Finn Family Moomintroll”, when the children find a
Magician’s Hat and Moomintroll jumps into it. He turns into a King of California, which no one will recognize. Moomintroll gets scared, but then Moominmamma looks him in the eye and sees her son. Moomintroll is transformed back to his own self.


The third story is from“Tales from Moominvalley” short story “The Invisible Child”. A little girl named Ninny has been frightened by her previous care taker so badly that she has become invisible. Moominmamma gives her love and affection, the others play with her. Then Moominpappa plans on sneaking up and scaring Moominmamma, but Ninny rushes up behind and shoves Moominpappa into the sea and Ninny becomes visible again.

The Moomins have many philosophical aspects that I was introduced to in Esa Saarinen’s philosophy lecture at Aalto University. In Professor Saarinen’s opinion we have a lot to be learned from the Moomins. First, not everyone has to be supermodels with long legs. Moomins have short legs and they are fine and live a happy life. Second, travelling and adventures are fine, but Moominvalley is the enough. And thirdly like Moominmamma’s philosophy the most important thing is to make sure everyone else are happy. There is also a book about Moomin philosophy at the light of exsistentialism by Jukka Laajarinne (Muumit ja olemisen arvoitus).

In Tove Jansson’s books Moominamma loves to cook and attend to her garden. To the theme have been published two books: Moomins cook book and Moominvalley Gardening book.