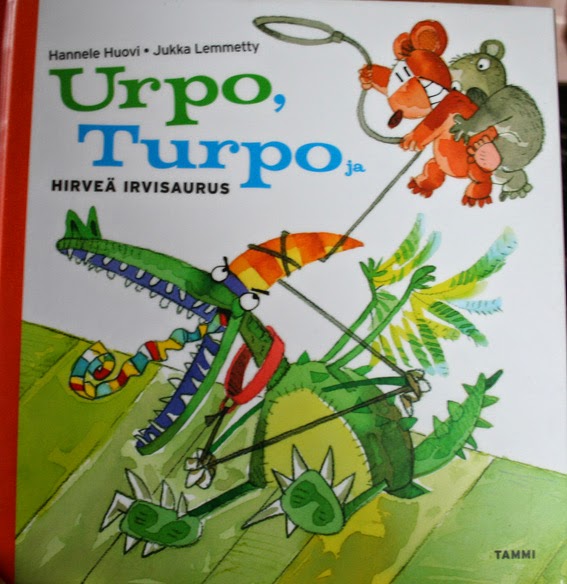 Urpo and Turpo are teddybears that live in a children's roon in a green house. Urpo is a grey teddy with a wide behind. Turpo is brown bear, a daredevil and an adventurer. Toghether they cause mayhem.

The charachters are based on Ms. Hovi's son's teddybears. One day the boy introduced them as Urpo and Turpo and that inspired Ms. Hovi to write about their adventures.

The first Urpo and Turpo adventure was publised in 1987. Later on came several other books that dealt with temper tantrums, philosophy about the universe, tolerating difference and the beginning of life with delicate humor.


In this book a new creature: some kind of saurus that makes faces joins the crew in the children's room. Urpo and Turpo want to make friends withe the newcomer, who is not very co-operative. Urpo and Turpo decide to take a new approach: tendernerss. And what happens? The grimacesaurus becomes their defender and friend.

Urpo and Turpo were also seen as doll animation in tv.
Posted by Hannahippo at 6:52 AM