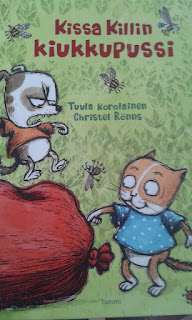 Cat Killi has a temter tantrum as soon as he gets out of bed. Breakdast sucks and everything is wrong. The house elf gives him a bag, where he can blow his bad temper into.  Kiukkupussi in Finnish means also a person that has a bad temper.

Killi goes out doors and meets dog brothers who are arguing and after they blow into the bag, play nicely with each other. A sheep is fighting with his car and Killi helps him to be in a better mood. Finally Killi goes into a soccer match, where every one are shouting at each other. Killi's bag gets really big and it is punctured by a crane. 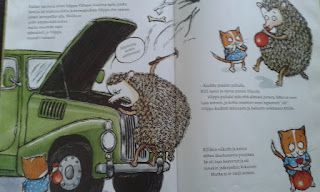 The lesson here is that kids are always taught to control their temper, but in this book it is the adults that need the control more then the kids. And how are the kids supposed to learn, when adults are throwing temper tantrums?

It is ridigulous, how the tempers rise in trafic and in sports events. It is as if our generation were not taught enough to deal with our feelings and then they explode in sports events and traffic. Parents, take a note and pay attention to your own behavoiur.

Posted by Hannahippo at 2:05 PM