A classic fairytale of an orphan girl.

Soon she sees fairies that have heard how kind Päivikki is to her sister, even though the sister is mean even to their cat. The cat has told the fairies how kind she is and as a reward the fairies show her, where the mushrooms are. But first gets to visit Fairytaleland. The road to Fairytaleland travels through Troll Mountain. The trolls are evil and should be avoided. The fairies give Päivikki an invisibility cape, but she must not speak while wearing it or else the cape will tear apart and vanish.

They approach Troll Mountain and see the first troll. The fairies hide and so does Päivikki. The troll passes by and the fairies move on. Päivikki gets scared and shouts that the fairies would wait. As soon as she says the words the cape wanishes. Päivikki must now be extra careful. Soon another troll comes along. All fairies hide and Päivikki hides behind a rotten stump. A raven reveals Päivikki’s hiding place and the troll finds her. The troll decides to take her as a toy for the Troll Kings daughter.

Päivikki meets the Troll King and the King tells her that the Fairyland citizens are lazy and the trolls are hard working. He doesn’t let her go. A witch named Mossy takes Päivikki to the king’s daughter. The Troll Princess wants Päivikki to change her clothes and cut her golden hair. The Troll Princess wants to be the prettiest. Mossy takes Päivikki away, cuts her hair and stains her face and hair. Her hair will be spinned into gold.

Päivikki entertains the Troll Princess and is her servant. When night falls Mossy says she likes Päivikki and lets her cat Nighteye stay with her. Päivikki is a little scared of the cat, but the cat’s purr is friendly. Päivikki cannot sleep. The cat starts to talk to her. Nighteye tells Päivikki that she can get out. Mossy has a key that opens any door. Nighteye will bite the leather strap and Päivikki will open the hatch in the floor. Päivikki pretends that she is sleeping so if Mossy wakes up, she won’t suspect her.

Nighteye gets the key and Päivikki opens the hatch. They take the stairs down and continue to walk to a cave. Nighteye sees a small sword and grabs it with them. The cave opens to a lake and the two jump into a boat. The boat bumbs into a rock. Nighteye asks Päivikki to open the rock and sunshine greets them. Päivikki is delighted and turns to pick up the cat. But there is no cat, instead there is a beautiful prince. The prince says that a troll had turned him into a cat and he had stayed that way, if Päivikki hadn’t taken him with her. The daylight changed him back. Nighteye tells Päivikki that his the Fairytaleland’s prince and that he will take Päivikki there and make her his sister. Päivikki is horrified; she cannot be a princess especially now that she looks horrible.

Nighteye touches the dirt with his sword and a spring appears. Päivikki also needs soap. Again Nighteye touches the ground and soap appears. Nighteye also makes clothes for Päivikki. They get tired and fall asleep. Nighteye wakes up and sees Mossy looking for them. They have to run. Nighteye hits the ground again, but nothing happens. Päivikki starts to cry. Suddenly Nighteye sees a hole in a trunk of a birch. He asks Päivikki for the key. Päivikki cannot find it! But then Moon shines and the key shimmers.

They are hardly inside, when they hear Mossy. Mossy asks her pet fox if the runaways are in the tree. The fox says yes. Then Mossy tells her raven to get the troll servants to cut down the tree. Päivikki and Nighteye are worried, but then the tree fairy appears infront of them and minimizes them to the size of a thumb. The fairy takes them to the top of the tree and helps them on leafs, which curl up so that they cannot be seen.

The fairy tells them to run to the tall grass, she will then let Mossy inside the tree. Mossy will probably leave and the fairy will join Päivikki and Nighteye back to normal. The leafs are separated: Nighteye’s leaf flies deep into the forest, but Päivikki’s falls right in front of the fox. Päivikki stays still. Then the fox smells Päivikki and takes the leaf and Päivikki to Mossy. Mossy turns Päivikki back to normal size. Nighteye comes running and asks Mossy to turn him back into a cat, he won’t leave Päivikki. Mossy turns Nighteye back to normal size.

Suddenly the sun rises and Mossy like other trolls die in daylight. She runs back into the mountain. Päivikki and Nighteye laugh happily, because they are saved. The children start walking, they get hot and tired. They start running until they arrive at a white gate. On both sides of the gate stand two white creatures. They are fairies. The gate flies open and Päivikki and Nighteye walk into Fairytaleland. 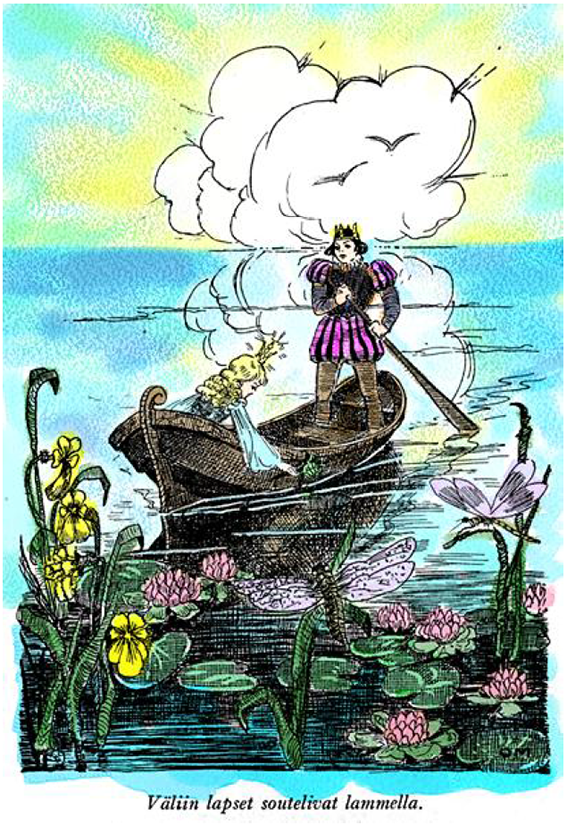 Nighteye takes Päivikki to meet his parents and asks if she can stay. When he tells them that she is an orphan that was found in a brown basket, the King and Queen realize that Päivikki is their long los daughter. The witch Mossy that Päivikki met earlier stole her when the King and Queen had been riding near the Troll Mountain. Päivikki stays. The garden in Fairyland is magnificent and the children row on the lake. Once Päivikki sees a white hand rising from the water, the hand gestures Päivikki to come. Nighteye gets mad and tells her that the mermaids are trying to lure her to the lake. He also warns her that if she follows the mermaids, she can never come back.

Later in the sunset Päivikki sees a coral castle at the bottom of the sea. From the foam rises the King of Sea’s son and encourages Päivikki to come to him. Nighteye begs Päivikki not to look to the sea. The King is having a ball for the newly found princess and everyone is invited. After the ball, Päivikki climbs to the roof and looks at the sea. A fairy comes to her and says she brings a message from the sea. The Prince loves Päivikki and has sent her a gift. It is a pearl broach. As soon as it is attach to Päivikki, she feels the salt water running in her veins. The King’s right arm Master Elf comes looking for Päivikki and tells her that everyone is looking for her and that they are afraid that she has been kidnapped again. 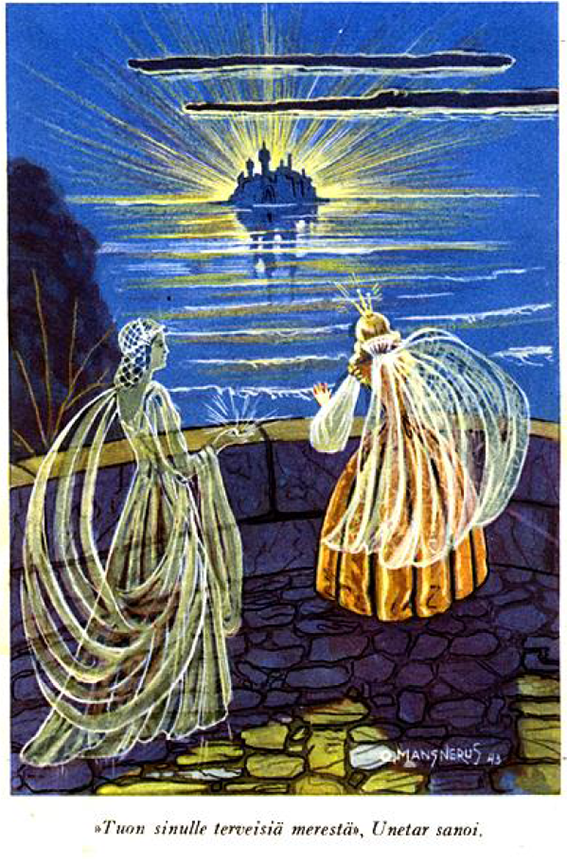 That night Päivikki cannot sleep. She keeps looking at her pearl. She starts walking in the castle. In the foyer sits Master Elf sleeping, Päivikki gets a key from him and opens the door. She is looking for Nighteye, who she thinks is calling her. She cannot find him. Päivikki runs to the lake and takes the rowing boat to the lake. The waterlilies follow her and under them are the beautiful faces of mermaids. Päivikki gets scared and she screams that she wants to get back to Nighteye. The mermaids only laugh and sit inside the boat. They try to lure Päivikki into the water. Päivikki calls for the Master Elf, who hears her and starts running toward the lake. He sees that the mermaids have gotten Päivikki into the water, but she is still holding on to the boat. Master Elf helps Päivikki to the boat and rows her back to shore. Päivikki gives her pearl to Master Elf as a thank you.

The next day Päivikki and Nighteye go to visit Päivikki’s old home. Her foster family does not recognize her. Her sister is jealous; she thinks she would have been more suitable than Päivikki to be a princess. Nighteye tells her that she is too proud and evil, but since the family took care of Päivikki, he has brought them gifts. Päivikki gives her foster father a box that has three yellow leafs. Her foster mother laughs derisively, they have enough leafs on the yard. But not leaves like these. Nighteye takes one of the leafs and the leaf turns into a cow. The next leaf he puts on the foster father’s arm and it turns to clothing. The third leafs turns into a cake.

Päivikki and Nighteye leave and Päivikki wants to see the sea. Nighteye promises to guard her from the mermaids. The sound of the waves make Nighteye fall asleep and a red moon rises from the sea and creates a wide silvery road. A voice tells Päivikki that it leads to the Castle of the King of Sea. Suddenly a beautiful, green eyed boy stands next to Päivikki. The boy repeats what he said. Päivikki wants to know, how he knows that. The boy says he has been there. The boy says he is the King of the seas son. He invites Päivikki to come to the castle. Päivikki tells him, she cannot, because then she cannot return. He tells her that they can go only so far that she can come back. Päivikki turns to wake Nighteye up, but a strong tidal wave rushes over her. Päivikki is blinded by the foam and she feels the wave taking her to the sea. Päivikki feels the King of sea’s son that holds her hand. His eyes mesmerize her. They swim to the sea, where the wind sings praise to the sea. Great joy fills Päivikki and she forgets everything but the green eyes. They sink deeper to the bottom of the sea and the deeper they sink the less Päivikki remembers Fairytaleland and Nighteye. So became Päivikki the queen of the seas.

Is this a happy or a sad end? That is for the reader to decide. The Päivikki's story isn't over yet. Aili Somersalo wrote another story about the Master Elf.
Posted by Hannahippo at 10:03 AM