The handbook of a young archaeologist 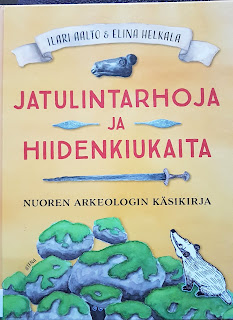 This book is fascinating! I even learned a few new Finnish words. All the things you learn, when you read. And  I couldn't decide, which picture to have here, so I took several.

The book is a guide in seeing things under our feet. Why is the medieval outhouse a treasure trove to the archaeologists?  The Egyptians weren't the only to use the shape of the pyramid. Of course, ours is much smaller and modest, but the burial of the dead was a ritual here in the  North as well. And they were not called pyramids, but hiidenkiuas (the stove in sauna). Very interesting. The book goes backward in time all the way to the stone age. Just keep digging.

Nature is very much present in the diggings, the Ukonkivi island in Lapland was a sacred place for Sami people.  And many other natural formations were important to people in the past. And they should be in the present.

One thing that bothers me is that as Finland was part of Sweden for hundreds of years, the name of the country is Sweden-Finland in all the study books. Why? There never was such a country: there was only Sweden and Finland was only its province, like Skåne. We never hear about a country called Sweden-Skåne.  Are we so petty that we need to exaggerate our importance?