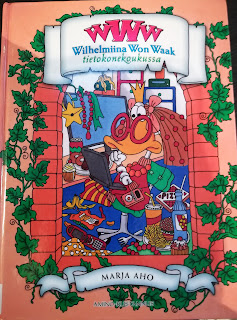 Marja Aho 2011: Wilhelmiina Won Waak
Princess Wilhelmiina is a regular teenage duck. She spends her day at BeakBook and posts videos on BeakTube. Her parents are starting to worry about her. She is getting into the marrying age, but she is not interested.  King Wilhelm suggest a party, but Wilhelmina doesn't want to. But then her BeakBook page starts to get friend requests and they want to meet her.  Even a Flipperball player, who looks really nice, is interested. Wilhelmiina changes her mind and a party is held. 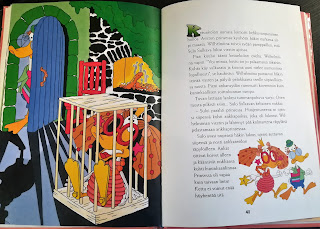 Then Wilhelmiina's brother Wiktor tells her that he arranged for all the other ducks to contact Wilhelmiina, so there would be a party. Wilhelmiina gets mad.  She also decides to write to the Flipperball player and demand an explanation. He said, he was sick and they arrange to meet the next day.

Wilhelmiina waits  and waits in the park. She left her phone home, so she could focus on the Flipperball player.  Then a fox leaps from the bush and takes Wilhelmiina to his cave. He is planning to have duck soup for dinner. Wilhelmiina is in a cage, but she persuades the fox to let her out for a while to look for recipes from the Internet. When the fox is not looking, Wilhelmiina send a message to the boy, who played the flute at the party.  He comes and rescues Wilhelmiina and the marry.

Donald Duck is very popular in Finland and I bet this book was inspired by him. Even though  the book was published in 2011 the discussion about kids using too much electronic devices is still current.

Posted by Hannahippo at 6:43 PM