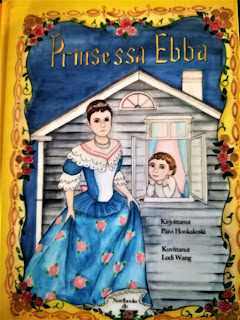 Ebba Lavonius was born in Helsinki 1850, but her family lived in Oulu. She was very educated and smart. In this book, the men fear her, because she can discuss all subject and is also very interested in them.  She also spoke several languages: German; French, Russian as well as Finnish and Swedish.

The book tells about her childhood in Oulu and how she is afraid she will never meet a man, who could marry her. She travels all around Europe, which was not common among single women at that time.

Finally she meets Prince Albrecht in a spa in Germany. The
Ebba Charlotta Louisa Lavonius becamezu Solms-Braunfels as she married Albrecht zu Solms-Braunfels in 1889. In the book, she seems a young girl, but she was 39, a pretty high age at the time.


Finland is a democracy. We were thinking about getting a German king, Friedrich Karl, but due to WW I, it didn't happen.  In any case, we keenly follow the monarchs of Sweden and I am glad I found this story of a Finnish princess, even though the royalty was through marriage. Sadly Princess Ebba died poor in Italy in 1927, because of WWI.