Elf Toljanteri and the secret misson from Santa 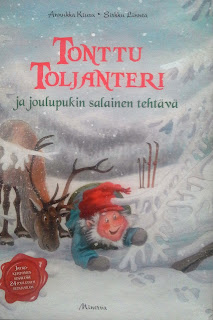 Elf Toljanteri is a beloved character from Christmas calendar (Joulukalenteri) broadcasted by YLE between 1998-2013.  Now we can enjoy Toljanteri's life in a book.  The example link is from 2007, when Toljanteri is taking over Mrs. Clauses activities, because she has caught the sleep bug and only sleeps.

The book is written by the scriptwriter of the series and the plot of this book is from the last season of Toljanteri's adventures, where Toljanteri takes over the tasks of the elves' elf, which means he has to write down, which elf is naughty and which is nice. Meanwhile Christmas is coming, but Santa's sled is worryingly empty. Trouble is caused by inspector elf Irmeli, who thinks all the toys are too dangerous to be given to children.


In the tv-series Elf Toljanteri is played by Kunto Ojansivu in all nine seasons of Joulukalenteri. I do not think any body else can ever play the role of Elf Toljanteri. Toljanteri is a very lovable character, because he is silly, makes mistakes, but learns from them. In the book he thinks about what to write to the naughty or nice list and make astute observations about, what actually happend and what is actually his interpretation of the situation.

I appologize for the fuzziness of the images.

Posted by Hannahippo at 8:19 AM