Life in the iron age 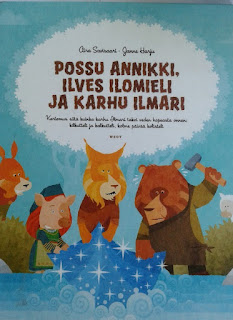 Pig Annikki, Bear Ilmari and Bobcat Ilomieli live near a birch rattling rapids. Annikki is worried about the food running out after a hard winter. She believes silver would make her happy. Bear Ilmari thinks about it and decides to forge a silvery blanket out of the silver of the water for Pig Annikki. After all he is a smith. After finnishing the blanket, it is so cold that they cannot sleep under it.

Then arrives the vikings, Fox Sinihammas the viking chief wants the blanket, but he does not have enough silver for it. He steels it along with pig Annikki's cauldron. Pig Annikki gets mad, not about the blanket but the pot. How is she supposed to make dinner without it? 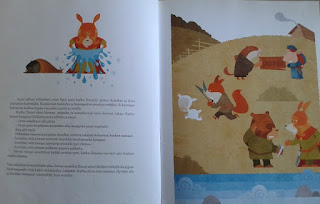 All three go after the vikings, it turns out the blanket turns into water outside the home waters. The vikings return the cauldron and promise to help with the household chores. Bear Ilmari gives them three iron nails as a token of good will. They will trade in the future. Pig Annikki also realizes that silver does not bring happiness. The wind in the birch branches and the light of the sky is may be.

At the end is a list of different months in the iron age. There used to be seven of them. Some months like Wintermonth in November-December and Summermonth in June-July were longer than others.

I especially like the wording in this book: "possu Annikin peittoa oli paikattu: pitkin poloisen possun peittoa pötkötti paikka paikan päällä." It describes, how pig Annikki's blanket was patched.  I also liked the simplisity and teaching of the book. I guess in every Finn there still is a part of the iron age left. In my opinion, we don't need much.

Posted by Hannahippo at 4:55 PM