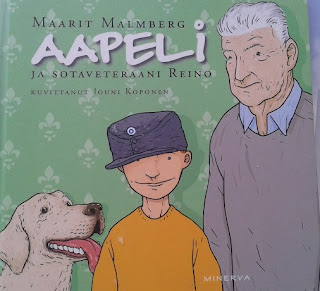 Aapeli lives next door to a  retirement home. There lives Reino, who was in the Winter and Continuation war.

Aapli knows Reino and his dog Rauha. Aapeli visits Reino often and Reino tells him about his childhood in Carelia.

He tells Aapeli about the farm and all the animals they had. Aapeli knows that Reino is old and then Reino tells him about the war. 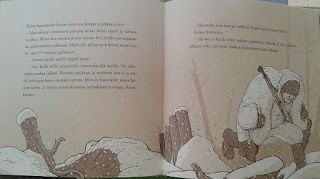 He remembers September 10th 1939, when he had just finished his army duty. Then he received a letter to join the army. The war hadn't started yet, but the recruitment was on already.

Reino explains about mobilization, shows him photos and tellss him about his duties in the war. He served as a medic and tells about the other boys and men, who got hurt. He even carried some of them to safety.

Aapeli asks, if Reino was scared. He says yes. Everyone was scared, those in the front and those back home. Aapeli asks, why he fought. Reino says he wanted to keep his home, which he couldn't keep. But he secured other homes. Aapeli's mother shows a map, where Finland was bigger.  Many people had to move, if they wanted to stay Finnish. Reino tells Aapeli that he was sad and mad, because he couldn't go home. But the most important part was that the war was over.

In Finland we talk about veterans, who fought in the Winter and Continuation War.  There aren't many left and I do not understand why we do not talk about the younger veterans who have served for the UN. I guess it needs more time.  This book is very matter of fact and even though it is about war, I think it is suitable to be read to school children. I know that many men and women who experienced the war did not like to talk about it. My Grandpa didn't.
Posted by Hannahippo at 2:49 PM