Tales from the Home spruce 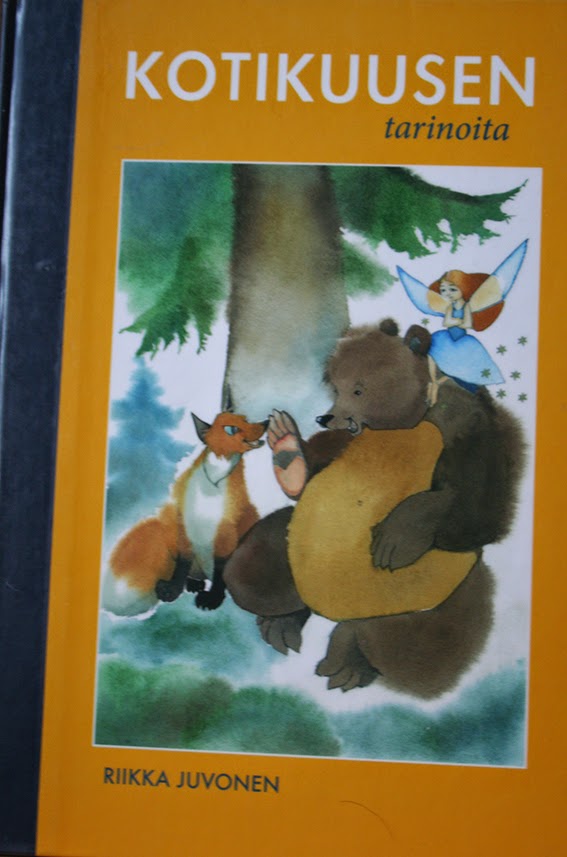 Old Finnish proverb: “Sitä kuusta kuuleminen, jonka juurella asunto.” demonstrates the importance of understanding your origins and home environment (Basically: Listen to the spruce, under which your home is.) Three cute stories the home spruce tells everyone who wants to listen, every story has a lesson to be learned about friendship, kindness and understanding.


The bear and the fairy

Bear happily demonstrates his strength to others. It had nothing to fear, but neither had he any friends. One day Otso (one Finnish synonym for bear) sits on the meadow and is happy, but he has no one to share it with. He starts to cry. A fairy arrives from the Rainbow and does not know anyone. She asks, if she can join Otso and if he could teach the bear dance for her. All fairies at the Rainbow love to dance. Otso thinks this is strange, but starts to dance. It is fun and Otso forgets all his worries and dances with the fairy.

Other animals arrive, but Otso and the Fairy do not see them. None of them believe what they are seeing and start to laugh. Otso gets mad and runs to the forest. The fairy does not understand why Otso left and flies after him. Otso growls that he won’t dance: he is scary and powerful. The fairy tries to explain that even though he is all that, does not mean he has to be alone. The fairy was sent down to help him. Otso would have wanted another bear, wolf, wolverine or even a raccoon dog. Light fairy is not his idea of a friend. Otso yells at the fairy that she should go back to where she came from and tomorrow he will tear down all forest. Let them laugh at him then!

In the morning the fairy tickles Otso’s toes. He has company. All the other animals want him to teach him how to dance. In the fall fairy has to move back to the Rainbow and Otso goes to hibernation knowing that the fairy will be back in the spring.


Snappy Ram and the cloud sheep

High on the sky promenade a herd of cloud sheep. The weather elf is happy with her sheep. Little Snappy is not happy, his mother had just upbraided him for picking on the other lambs. Snappy thinks he is the son of a thunder cloud and not cotton candy and decides to show the others that he can raise a storm as well.

The weather elf tries to stop him, but Snappy just huffs and puffs and shakes hail from his wool. It booms and makes lightnings. It breaks children’s sand castles and creates a mess at the beach, where people are enjoying a lovely summer day. Then he gallops to the fields. There his breaks the electric wires so the freezes melt, milk gets bad and all get wet. Snappy is now happy. The weather elf waits for him very sad, and so do the rest of the herd. Mother says Snappy has embarrassed them all. A real thundercloud refreshes the air, when the heat is too suffocating. The weather elf orders Snappy away from the herd, to the place where tornados, hurricanes and thrombuses are. Snappy is fine with that. The outback of the sky is gloomy. A strong tornado grabs Snappy and shakes him so that he feels sick. The others try to pull him a part too. Soon he is just lying there, alone and unhappy. He just wants to go home to mother. Snappy returns to the others shouting that he wants to be a cloud sheep and nothing else. All get happy and hug him. His father tells him, that a good sheep learns from his mistakes.

Fox, Bear and the Snake tree

The snakes have just woken up in the spring. Bear also smells the fresh air and stretches out on the ground, when a snake bites him. The bear gets mad: who dares to disturb him, the king of the forest. A fox hears him and comes to see. The bear’s ear is all swollen and he needs the forest elf’s magic lotion.

The bear summons all forest animals. The snakes need order and the bear suggest that they are exiled from the forest. The leader of the snakes defends them, that the snakes are very frightened and only defend themselves. The fox suggests that the snakes move to the tree. When there is no fear the snakes and the other animals get to know each other. The snakes help lost animals to find their way. In the fall the leader snake makes a nest next door to the bear. The bear is sure that next spring they can learn to live in peace. Friendship gets everyone to live in peace.

Posted by Hannahippo at 8:13 AM