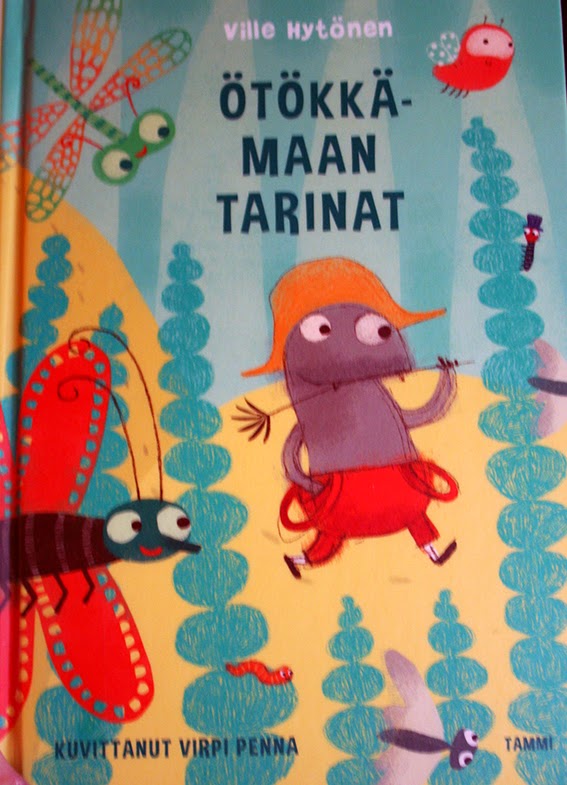 Läntti ja Likakasa  (Spot and PileOfDirt)
Läntti and Likakasa are an odd couple, both are very dirty and like leeks because of their strong smell. The filthy friends live together and when guests come over, they always sit above wind so the stench isn’t so bad. Family Harjumaa come with clothespins in their noses and wonder why Läntti and Likakasa never bathe and never wash their clothes. Lika asks them why to change clothes when they get dirty again soon.

Läntti’s clothes are ancient and filled with bugs that are extinct. One day Likakasa’s hat and Läntti’s shirt disappear. Läntti and Likakasa search everywhere but cannot find them. Suddenly they see Family Harjumaa, the dad waring Likakasa’s hat and the mother wearing Läntti’s shirt. Dad appologises they just wanted to know what it felt like to be dirty: it is relaxing. Läntti is philosophical: in order to be clean, one must know what it is like to be dirty.

Old Tuikka (Vanha Tuikka)
Old Tuikka is very old and very grumpy. He is almost a month old. Old Tuikka chases Hämämäkämäkki away, tells Kiippu Käppänen that some one should teach him some manners, Vaaksiainen looks messy and in Old Tuikka’s opinion Ippu Pötökkä only idles his time away. Old Tuikka shouts his opinion to everyone about their flaws. The others decide to throw a party, maybe that will change Old Tuikka’s mood. They have food, decoration and drinks, but they forgot music. Old Tuikka arrives and berates everyone. Then the others tell him that they do not have any music. Old Tuikka says he sung when he was younger. Soon the evening is filled with music. Tuikka is joyful and looks happy, which makes the others happy, too.

Old Tuikka sings a song about to filthy Friends 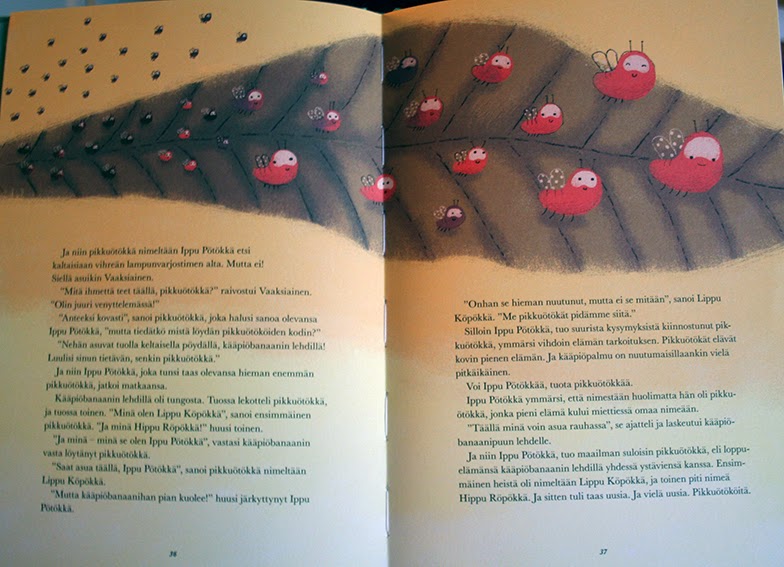 Small bug called Ippu Pötökkä
A small girl names him (or her the name doesn’t tell and Ippu could be a boy’s or a girl’s name) just before she falls asleep. Ippu becomes obsessed to do something grand after previously he was a small bug, but now he is Ippu Pötökkä (The name comes from Pikku Ötökkä, a small bug, but people tend to mix up letters evey once in a while). If you have a name, you have to be important. Ippu flies around the room and finds a small banana, which looks like it could use some water. Ippu is too small to lift the water can so he decides to find help. He finds an old Raisin at the cupboard and the old Raisin tells him to find the small bugs at the red paper basket. There live the big flies that tell Ippu to search for the small bugs under the lampshade. But there lives a Vaaksiainen, who tell Ippu that the small bugs live on the banana leaves.

Ippu finds them and they say that they like the banana just the way it is, a little wilted. Ippu understands that he is a small bug too, whose life is spent wondering about his name. He decides to live on the leaf with the other small bugs.

Hämämäkämäkki
Hämämäkämäkki is a spider (hämähäkki in Finnish) who does not have any bugs in her net (in the picture Hämämäkämäkki is drawn as a girl) She is hungry and annoyed. Actually she does not want to eat other bugs, they are lovely company. Nonetheless Hämämäkähäkki has been taught that she must eat other bugs. She tried once: apologized and tried to swallow the bug whole. She felt bad.
Now a Äkämäkätkökääriänen (a moth) gets tangled in her web. The moth asks her not to eat him. He is expected at home for dinner. The moth suggests something else Hämämäkämäkki could eat. She is delighted: needles are her new favorite food. From then on she throws great parties with web swings.

The best Punkeri in the forest
Punkeri’s job is hard: it punkers all the time and no one understands what he does. So Punkeri must punker all alone. Punkeri tries to show others what it is that he does, but others think it doesn’t make any sense. Jäärä (a beetle that also means a stubborn person in Finnish) tries to comfort him: nobody knows what Jäärä does either. Punkeri knows: Jäärä eats log houses. Jäärä corrects him: he is a baker. They spend some time together and it turns out that punkering fits well with baking. Together they make wonderful treats for everyone.

Kirppujen yö runo (the night of the fleas poem)

Kippu Käpänen and thousand sailors
Kippu Käpänen is walking to the lake. He is the nicest and fairest of all bugs. He drinks from the lake ans sees a bark boat coming his direction. The boat is full of ants. The ants want to know what he is doing at their beach. Kippu does not understand how the shore is theirs, the shores are public places. The ants start to talk amongst themselves and try to figure out what to do. Their greenflies need a place to pasture. Kippu tells them ther is plenty of room for everyone at the beach. Kemppi arrives and says the beach is his. Kippu Käpänen suggest that the beach is public so that every one can enjoy it. Others agree.

Herra Pöntinen (Mr. Pöntinen)
Mr. Pöntinen is not a bug but a small man, who dressed like a gentleman. All bugs in the forest come to see him. He tells them that he is going to write a book about the bugs. The bugs have many talents that only few humans have. Tuikka learned how to calm his meanness with singing, Pukeri is proud of his profession event though others don’t understand. Kippu knows how to negotiate and settle things so that every one is happy. Läntti and Likakasa understand that hypocrite tidiness isn’t the most important thing in life. Ippu Pötökkä is important even if he is small. Every bug gets praised . Mr. Pöntinen wants humans to learn to live beautiful and peaceful lives.


The stories are great except the last which is too much teaching. Kids are smart and I think they get the point even though it isn’t written out. The most amazing thing is that the bug with the most ridiculous name (Äkämäkätkökääriänen) is an actual bug species. I guess the most creative people work in biology coming up with names like this.