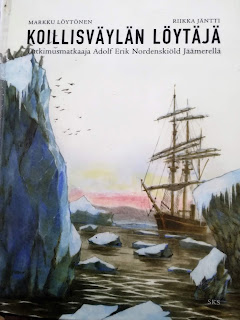 
This is the story of Adolf Erik Nordenskiöld, who was born in 1832 in Helsinki. His father was a Nils Nordenskiöld who's nickname was the farther of mineralogy. Adolf Erik was the third eldest child of seven and he was very curious and interested in finding things out.

He dropped out of school, when he was sixteen, because his principal J.L.Runeberg (a famous Finnish poet) was too strict. Adolf Erik continued school, graduated from high school and studied mineralogy, mathematics, physics and chemistry at the Helsinki University. 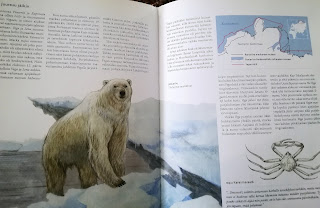 Nordenskiöld explored  Ural with his father, Greenland and Spitsbergen, before he shipped off northeast. He bought Vega, a ship with 60 horsepower steam engine and sails. The crew had 21 members and six scientists.

The exploration had many set backs not only ice but a heavy fog as well. At the  Taimyr peninsula Nordenskiöld noticed that they were sailing on dry land, because the maps had been drawn wrong. Finally in September  1878 Vega got stuck in ice, the expedition continued in 10 months, in June 1879.  When they finally reached Japan, they stayed there eight months.  They returned home April 10th 1880 sailing around Eurasia for 2 years and 10 months.

Remarkable story and the illustrations in this book support the historical value of the expedition.

Nordenskiöld also wrote about his expeditions even for common people, which were translated into several languages.

Posted by Hannahippo at 8:48 AM