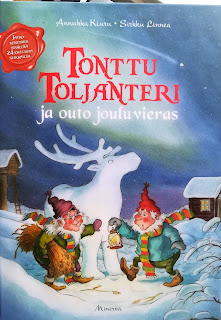 Elf Toljanteri is bitten by Grum-bee and it makes him act strangely. He snaps at everybody and refuses to do his chores. Naturally he tries to hide his condition so Santa will give him presents.

Luckily Elf Niilo, who looks just like Toljanteri comes and agrees to play Toljanteri's double. This creates all kinds of silly situations.


I have been reading this to the boys and now I can see that they are listening. Every time a grown-up snaps or shows temper they say he (notice it usually is a he) is bitten by a grump-bee.  I also like the colorful language that is used. We also learn about tuhmaikä (a version of uhmaikä which children get in the age between 1-5, when they learn independence and defy all orders given to them.)