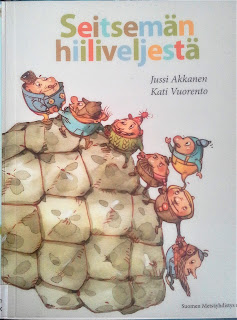 The seven coal brothers are coal molecules and every now and then they return to the sky after circulating from plants to many places.  The brothers get into the tree, when there is no frost and the sun is shining.

Now they want to compete. They decide the winner is the one, who returns last to the sky. They choose different pines and then wait.

The tree of the second brother was made into a chair and it too was finally burned.


The third brother ended up as fuel chips creating heat and electricity for the city.


The tree, where the fourth brother lived happend to be primeval forest. The brother stayed there until the tree fell and decayed.

The fifth tree was used to make a house. The fifth brother stayed there for a long time. The tree of the sixth brother was made into biodiesel. We do not know when we are going to see him.  The seventh brother chose a tree in the swamp. The tree fell and sank and is still there.

The book also gives examples of other coal brothers, which have been in cows, steam engines and volcanoes. I guess, when the competition was who stayed the longest, it means the longer the coal is tied the better.  Very cute approach to