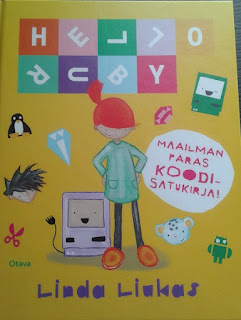 Book about programming. Ruby is a little girl with a massive imagination. She is somewhat cheeky: she leaves the pajamas on, when dad tells her to put on school clothes: he did not tell her to take off the pajamas first. (Lucky dad, who wouldn't want  a kid who needs specific instructions to do every day chores?)

One day dad hides Ruby five treasures. She is all excited. But first she has to find the clues. The clues tell that snow leopard lives in the mountains, penguins do not live in houses, foxes live 100 x 4 steps away from the snow leopard. Ruby draws a map and off she goes.

Programming can be seen throughout the book: in Ruby's hints to find the treasures as well as Ruby directing the foxes to be more efficient in their garden. 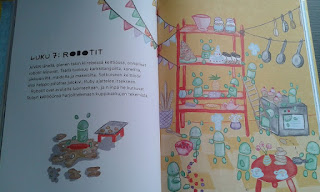 The kids may like it, but the target audience are the adults: the resistance to program does not come from the kids, but from their parents.  The book has great examples of how repeating something can create larger entities.

The book also includes exercises that help children to think in programming mode. It is not hard if you practice it.

Programming is taught in Finnish comprehensive school, but there is again a heated discussion, why girls are not interested in programming. Programming is considered a mathematical skill. But why? Aren't they programming LANGUAGES? A smart marketing person should take this and redo the programming image. Kids shouldn't be labeled with mathematical skills and language skills. Anybody can learn anything if they just put time and effort to it. Just make it interesting.

Posted by Hannahippo at 9:46 AM