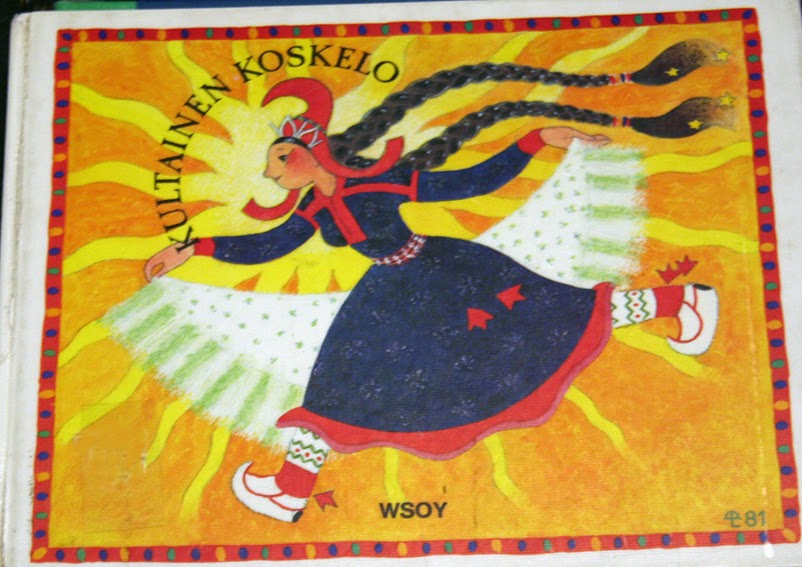 Naavisemo and Luhtakka are neighbors. Naavisemo has a beautiful daughter, but Luhtakka’s daughter is ugly and vicious. Prince wants to see Naavisemo’s daughter and as soon as he does, he wants to marry her.

The prince gets mad and wants to kill the girl and her brother. Naavisemo’s son tells him about the switch and tells the prince that he should catch the merganser and hold tight. When se shifts into a spindle, he should break it in two and through the other have into the sea and hold on to the other. The prince dresses up as the brother and goes to the shore. The golden merganser rises as Naavisemo’s wonderful daughter. The price grabs her and does as the brother told him. At the end the other half of the spindle becomes a merganser and the Naavisemo’s daughter. She refuses to come to the castle as long as Luhtakka’s daughter is there. The prince burns Luhtakka’s daughter and weds Naavisemo’s daughter.

I particularly like the illustrations of this book. To me they are some what exotic. This book has been published in five different Sami language, Finnish and Swedish. My ignorance shows no limits: I thought there is only one Sami language, but there actually is nine of them (Few are spoken by less than 10 people). I wonder about the names. The daughters' names are not told, only the mothers'. This story has been told in different versions and at the beginning of the book is told that Naavisemo and Luhtakka are mythical characters, from whom the real people and nasty hags stem.

Posted by Hannahippo at 7:18 AM